Spielberg’s Union Soldiers Not So Hokey 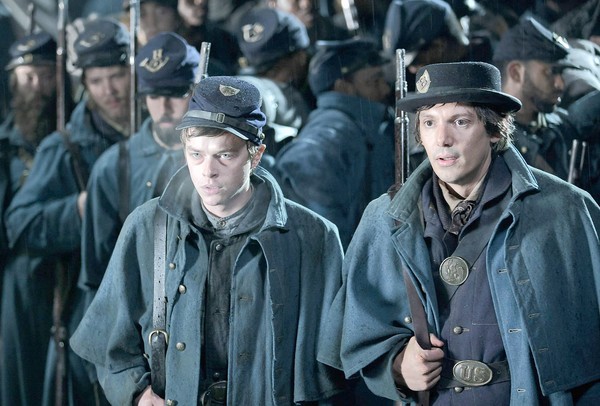 Thanks to all of you for the thoughtful comments in response to my posts about Spielberg’s Lincoln [and here] movie.  I love to be able to use the blog to share my thoughts, but often your comments are much more interesting.  Like some of you I blew off that opening scene in which Lincoln talks with a couple of white and black Union soldiers following the battle scene.  After reading Bjorn Skaptason’s comment I now see that as premature.  There is much to consider in that scene.  Here is his comment:

I have seen the film just once, like you. I might have taken more away from that opening scene, though. I think the battle scene is clearly the U.S.C.T. soldier describing his experience as part of the 2nd Kansas (Colored) in the battle of Jenkins Ferry, Arkansas. Ken is right that there was a hand-to-hand fight there for a couple of guns during a driving rainstorm in a muddy, plowed field. The Second Kansas took no prisoners in that engagement. The soldier then goes on to describe a reasonable transfer scenario wherein he joined the 116th USCT in Kentucky, and now he is standing in front of the commander-in-chief at a wharf in Washington, D.C.

Further, the infantryman is in company with a cavalryman who identifies himself as part of a Connecticut Volunteer regiment (the 5th?). That individual is much more aggressive in challenging Lincoln on the failures of his administration. The infantryman is visibly annoyed by this. There is rich subtext here for historians. The infantryman is a Kansas freedman, escaped from bondage in Missouri, and fighting to destroy slavery. He is thrilled to meet the Great Emancipator. The cavalryman is probably a free born New Englander, obviously well-educated, and committed to a mission of equality that Lincoln is distinctly failing at. He will not let Lincoln get away with empty promises and half measures.

The unspoken conflict between these two soldiers, played out in annoyed sideways glances, foreshadows the conflict of the movie – a conflict between overthrowing slavery on one hand and establishing equal rights on the other. They aren’t the same thing, they weren’t perceived as such at that time, and the movie sets up that nuanced view of the situation in the first scene.

Then the white kids come in, and they are a little goofy, but they give us a chance to see Lincoln pre-visioning his own deification, and not liking it very much. Then everybody leaves to get on their transports that carry them off to their date with Fort Fisher. During a later scene we get to see Lincoln’s reaction to casualty reports from that battle, and we catch a glimpse of people reading long casualty lists in the newspaper. Our proud freedman, caustic cavalrymen, and goofy kids might well be on that list.

It’s a good scene in a good movie, I think.

There is much more to think about here, than in the typical costume balls that serve as Civil War movies.

Next post: Steven Spielberg and Tony Kushner Are Not Historians