They Attacked Shouting “No Quarter” 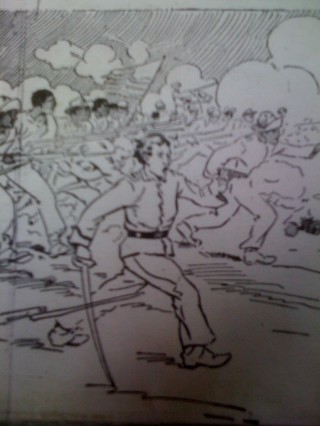 One of my responsibilities at the upcoming Future of Civil War History Conference at Gettysburg College is to moderate a panel on interpreting USCTs at historical sites.  Panelists include Barbara Gannon, Emmanuel Dabney, Hari Jones, Joseph McGill, Jill Newmark, and Robert Sutton.  The presenters have already submitted short essays on various issues that they believe are important to discuss.  I’ve pretty much finished reading through them and am in the process of identifying challenges associated with the interpretation of USCTs as a point of departure for further discussion.  Many of the papers reference the influence of the movie Glory on popular perception as well how we interpret the massacre of black soldiers on battlefields such as Fort Pillow and at the Crater.  While I am particularly interested in how we frame the massacre of black soldiers the question of how we address instances where black soldiers executed Confederates has not been adequately addressed.  Consider the following passage written by Park Ranger Emmanuel Dabney who does address this with visitors to the Petersburg National Battlefield.

One of the ironies I discuss with visitors is that the US Colored Troops capture Confederate earthworks which were primarily dug by slaves and free blacks. In discussing the troops assaulting these works, I read directly from a letter written by Henry M. Turner, chaplain of the 1st United States Colored Troops. Turner stated that the Black troops and the “the rebels were both crying out – ‘Fort Pillow!’ This seems to be the battle-cry on both sides.” He wrote of the men assaulting the position and the Confederates retreating which he humorously wrote that the Southerners went “out the rear of the forts with their coat-tails sticking straight out behind.” Immediately, he makes a powerful summary of how Confederate prisoners were treated as he penned, “Some few held up their hands and pleaded for mercy, but our boys thought that over Jordan would be the best place for them, and sent them there, with a very few exceptions.” I tell our audiences that while Chaplain Turner did not condone killing of Confederate prisoners it was done in retaliation to the Southern Congress’ May 1, 1863 legislation which stated that Black men found in the Union army’s ranks were slaves in insurrection and that the white officers leading them were inciting a servile insurrection. In both cases the Confederate legislators and the war department condoned the execution of USCTs as well as their white officers. I note that according to white Union soldiers, some of them that night stopped more Black troops from killing Confederate prisoners.

I suspect that these are very difficult stories for visitors to digest.  They certainly don’t fit the overall narrative of those who have been influenced by the movie Glory as well as the Sesquicentennial’s emphasis on emancipation and the sacrifice of black soldiers.  In this narrative battlefield massacres are central to a story of African American sacrifice for the Union and the eventual attainment of civil rights.  Whether intentional or not our embrace of emancipation as the central theme of the Civil War affords black soldiers what might be described as a kind of moral immunity.

When USCTs are killing Confederates they are engaged in a fight for freedom and in those unfortunate moments when they are executed they are victims of an uncontrollable rage that has its roots in a society committed to maintaining slavery and white supremacy.  How should we characterize incidents of black soldiers executing Confederates?  I agree with Emmanuel that part of the explanation must reference legislation from the Confederate Congress, but that doesn’t constitute everything that we can learn from accounts such as the one cited above.

We have little difficulty coming to terms with white Union and Confederate rage on the battlefield and how it sometimes led to acts that fell beyond the rules of war.   But what happens when the conduct of blacks on the battlefield takes a turn, however slight, toward something that resembles Nat Turner’s Rebellion?  More to the point, what do we gain from looking more closely at these accounts when interacting with the general public and/or in the classroom and what are the risks involved?