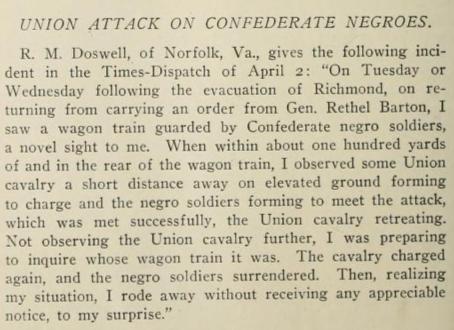 It never fails that at some point during the Q&A following a talk about my Crater book an audience member brings up the subject of black Confederate soldiers.  Most of the time the issue is raised in complete innocence.  They heard about it from a fellow history enthusiast or, more likely, read about it online.  Last week it was the first question following my talk at the Virginia Festival of the Book.  I offered my standard response and after the talk I had a nice chat with the individual, who thanked me for clarifying the issue and for suggesting some books for further reading.

Earlier that afternoon I had another conversation with a good friend who referenced accounts of black Confederate soldiers during the Appomattox Campaign.  Again, the subject was honestly raised and with a sincere interest in wanting clarification.  This is one of the more popular accounts that you will find online.  It is usually brought up to link the raising of black soldiers during the final weeks of the war in Richmond with the battlefield.

I know of two accounts.  The first account can be found in the Confederate Veteran (1915).  R.M. Doswell very briefly references the charge of Union cavalry against a wagon train during the retreat, which was defended by a group of what he calls “Confederate negro soldiers.”  It is likely that these men were teamsters, who happened to be wearing uniforms (not uncommon) and not soldiers. William Marvel also concludes in study of the campaign that they were likely teamsters (fn. 11, [p. 253]).  As far as I know this postwar account is the only reference to this particular incident.

The only other account that I know of took place on April 5 (or 6).  It is referenced on the NPS’s Appomattox website:

Several engineer officers were superintending the construction of a line of rude breastworks… Ten or twelve negroes were engaged in the task of pulling down a rail fence; as many more occupied in carrying the rails, one at a time, and several were busy throwing up the dirt…The [Blacks] thus employed all wore good gray uniforms and I was informed that they belonged to the only company of colored troops in the Confederate service, having been enlisted by Major Turner in Richmond. Their muskets were stacked, and it was evident that they regarded their present employment in no very favorable light.

Unfortunately, the NPS site does not include a citation, which is extremely frustrating.

I tracked the passage down in Noah Andre Trudeau’s Like Men of War: Black Troops in the Civil War 1862-1865. His reference took me to an essay by Ervin Jordan in the collection of essays, Black Southerners In Gray.  Jordan apparently learned of it from Robert K. Krick who cited something called “The Watchman (New York), ca. April 1866 (?)” in a private email.

In the reference section to his book Jordan lists the file, “Robert K. Krick, Miscellaneous files and information on “Negroes” at FSNMP, but nothing about The Watchman.  The only thing I can think of is the weekly newspaper that was published after the war out of North Carolina by Charles Force Deems.  That would be very interesting if this were the case given the scope of what he published. It’s not that I necessarily doubt the story, but at this point we know nothing about the author or the context of its publication.

Previous post: The Community of the Civil War Regiment