From Heroes to Survivors 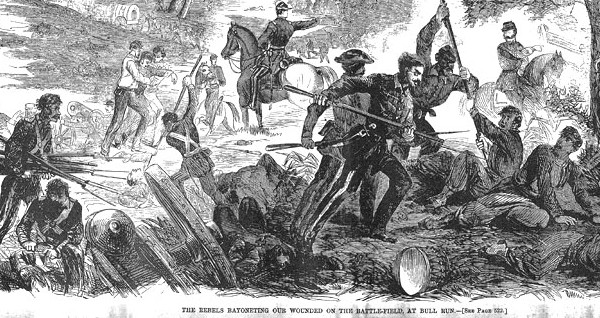 Earlier today I finished reading Michael J. Bennett’s essay “The Black Flag and Confederate Soldiers: Total War from the Bottom Up” which is also published in Andy Slap and Michael Smith eds., This Distracted and Anarchical People: New Answers for Old Questions about the Civil War-Era North

.  In his essay, Bennett explores accounts of massacres throughout the war that function as a case study of how various factors shaped what Mark Neely calls the “limits of destruction.”   After exploring evidence of atrocities on the First Bull Run battlefield, Bennett makes the following point, which I think is relevant to the ongoing discussion taking place elsewhere about the recent FCWH conference in Gettysburg and the call to move our public memory of the war beyond a heroic understanding of soldiers and battle.

How can these accounts be folded into the current narrative of the war?  The answer is that they cannot.  The best way to reach an understanding of what really happened at Bull Run and the events that followed is to rethink what soldiers when through in combat.  Watching GIs commit “un-American acts” against German soldiers in Italy during World War II pushed the combat artist George Biddle to seek a reassessment of the soldiers’ combat ordeal.  He wrote that it was unfair for civilians to think of soldiers as heroes or stars.  Instead, he thought it more appropriate that soldiers be viewed as survivors of a great disaster like a mine collapse or a burning building.  Only then could civilians truly understand the desperate circumstances and decisions under which soldiers fought. (p. 150)

Bennett focuses specifically on the use of the black flag in Confederate ranks as well as more disturbing behavior such as beheading and the mutilation of bodies.  While a good deal of focus is placed on Bull Run, the author references other battles as well such as Front Royal, Winchester, Fredericksburg, Seven Days, Wilderness, Chickamauga, and Stones River.  Keep in mind that when I first came across Bennett’s piece in the table of contents I immediately assumed it was about Confederate atrocities committed against black Union soldiers.  Interestingly, Bennett only briefly touches on these well documented cases.  The bulk of his time is spent looking at white on white atrocities, which is instructive.

This led me to question whether we have pushed away these stories into certain compartments that are more easily digested.  I wonder if it is easier to acknowledge the dark side of our civil war when it come to blacks and white massacring one another on a select few battlefields late in the war or among bushwhackers on the frontier, where we accept that Americans were somehow hardwired to engage in more brutal acts of warfare?  Does that preserve our most popular landscapes in Virginia, Maryland, and Pennsylvania for the kind of violence that we can more comfortably commemorate and even celebrate?

Finally, to return to the passage above, can we introduce atrocity stories into our interpretations of places like Gettysburg and Bull Run without having to fundamentally shift our understanding of the men who fought there?