The Social and Cultural Significance of Black Confederate Pensioners 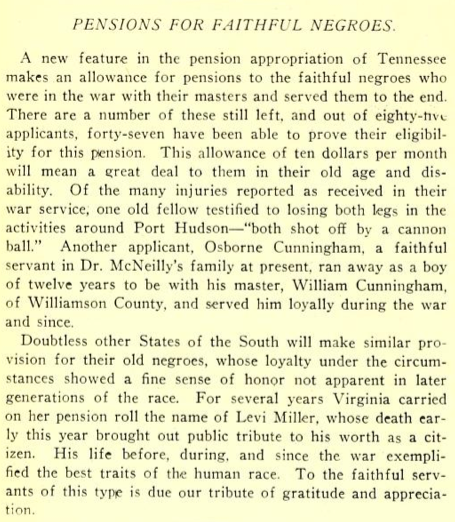 What I am interested in doing is posing a few questions about these pensions, which is the subject of chapter 3 in my manuscript on the history of camp servants and the myth of the black Confederate soldier.  My goal is to use the pension records and other sources to explore how white Southerners chose to remember the Civil War and specifically the role of camp servants at the turn of the century.  The questions posed clearly assume that the applicant was present as a non-combatant; in other words they are not classed as soldiers.  Regardless of the state the vast majority of black pensioners were servants and cooks.  What is even more revealing is that pension applications make no inquiry as to whether the individual in question was wounded on the battlefield.  This does not mean that such information never made it onto an application, but that it did not change the status of the applicant.  This is a crucial point given the emphasis that black Confederate advocates place on battlefield prowess.  Again, it apparently made no difference to how white Southerners viewed these men during the postwar period.

I may focus on one state or take a comparative approach.  Mississippi is very attractive since it was the only former Confederate state to include black non-combatants in its initial pension program for white veterans in 1888.  The program from the beginning included camp servants of Mississippi officers, who had been wounded during the war.  The next states to offer pensions to former servants include.  It might be interesting to explore Mississippi along with one of the following states.

This raises a whole host of questions in my mind. Why was Mississippi the only state to make this allowance early on?  Why was there such a time lapse before another former Confederate state passed legislation that included black non-combatants?  Most importantly, how should the inclusion of former camp servants, both in 1888 and in the 1920s be interpreted?  I have some ideas, some of which are pretty straightforward such as the symbolism of the loyal slave. In 1921 the Confederate Veteran reported on Tennessee’s revision to its pension system by noting the following:

Doubtless other states of the South will make similar provisions for their old negroes, whose loyalty under the circumstances showed a fine sense of honor not apparent in later generations of the race.

While the reference to the ‘loyal negro’ is clear and might help to explain Mississippi’s program, what I find interesting is the concern about the lack of ‘honor’ among blacks in the 1920s.  There were relatively few former camp servants/black non-combatants still alive in the 1920s.  Perhaps the flurry of activity in the 1920s has little to do with these elderly men.  What is it about race relations in the post-WWI South that might have led to the granting of these pensions?  Given that the pensions themselves were filed on a county level, what did local officials hope to accomplish with this program?

As you can see, I have questions, but no answers.  So, what do you think?