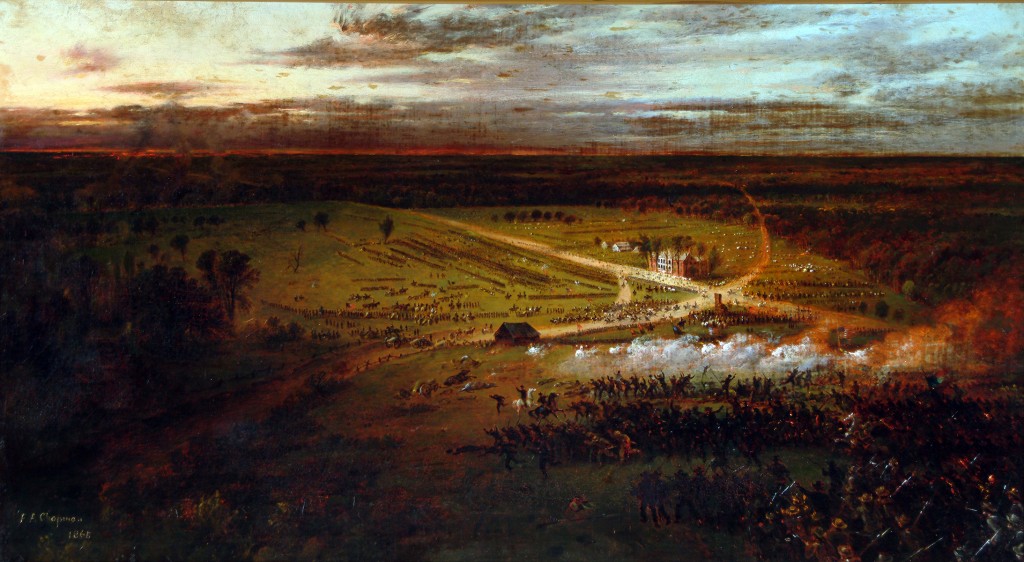 Frederick Chapman’s (1818-1891) painting, “The Battle of Chancellorsville” (1865) is not an easy image to come by on the Internet.  Information about the artist is just as difficult to nail down.  Chapman is a relatively obscure artist.  He served as the first president of the Brooklyn Art Association and was best known for his work with stained glass.  His best known paintings include “Raising the Liberty Pole” and “Perils of Our Forefathers.”  I would love to know a bit more about why he chose to paint this particular scene.  Did Chapman ever visit this battlefield?

The scene depicted here takes place along that famous Elys Ford and Plank Road crossroads.  The Chancellor House is still intact as the two armies converge in the largest clearing in the Wilderness late in the day on May 1, 1863.  The viewer is looking northwest as the final Confederate assault comes into view in the foreground.  I assume these are Confederates from Anderson’s and McClaws’s divisions along with Union XII Corps situated south of the Plank Road and Darius Couch’s II Corps on the opposite side.

The dreary sunset provides the perfect metaphor for a spring day that started off with such promise for Joseph Hooker’s Army of the Potomac.  We all know what’s coming next.  One of the things that I like about this painting is that it does not glorify war. Because Chapman chose to paint a scene quickly being engulfed in darkness, those unfamiliar with the landscape and battle may have to look close to even pick out who is attacking and defending.  Defeat and victory almost seem irrelevant here.  The few glimmers of sunshine that remain highlight another American crossroads and another home swept up by war.

[Thanks to John Hennessy for sending along a usable pic of Chapman’s painting.]