The Next President of the College of Charleston? 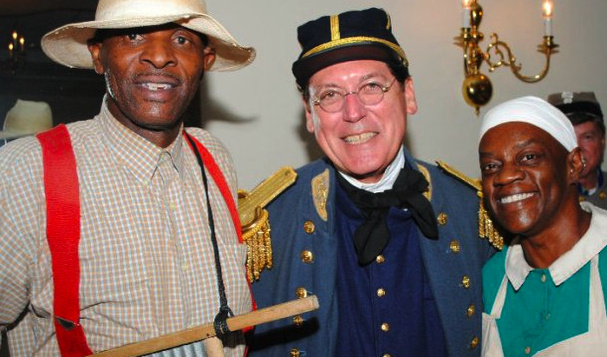 Photo taken at the 2010 meeting of the National Federation of Republican Women in Charleston, SC.

Update: Interesting story on the pressure that is being exerted by McConnell’s allies on College of Charleston.

The College of Charleston is looking for a new president and a number of state legislators are pushing the school to consider Lt. Gov. Glenn McConnell. The question raised in this article is whether his involvement with Confederate heritage groups and support of the Confederate flag reflects the school’s values and commitment to diversity. McConnell has to apply for the position by Jan. 14, but if he does the outcome of his candidacy will tell us a great deal about the state of Confederate heritage in South Carolina politics and culture.

Let’s review his Confederate past.

On the other hand, this past summer McConnell delivered the keynote address on Sullivan’s Island to mark the 150th anniversary of the assault at Battery Wagner led by the 54th Massachusetts Volunteer Infantry.

“The story of both the Confederates and the federals who fought that day is the story of the American people in their travel through time,” said South Carolina Lt. Governor Glenn McConnell, himself a Civil War re-enactor, in his keynote address. “Our march through history … is the story of a people who, in the pursuit or defense of freedom, as they perceived or understood it, were always willing to put aside the element of fear and answer the call of duty.”

No word on whether McConnell addressed the ways in which this “pursuit or defense of freedom” conflicted.

McConnell is a graduate of the school and I have no reason to believe that his Confederate past would necessarily prevent him from doing what is best for the college. Again, the main issue at this point seems to be the school’s commitment to diversity.

So, in 2014 the question will be: Can you serve as the president of a college in the birthplace of secession if you openly commemorate and even celebrate the Confederate past? It’s going to be very interesting to see how this unfolds.

Next post: Virginia Flaggers “Restore the Honor” One Racist Statement at a Time