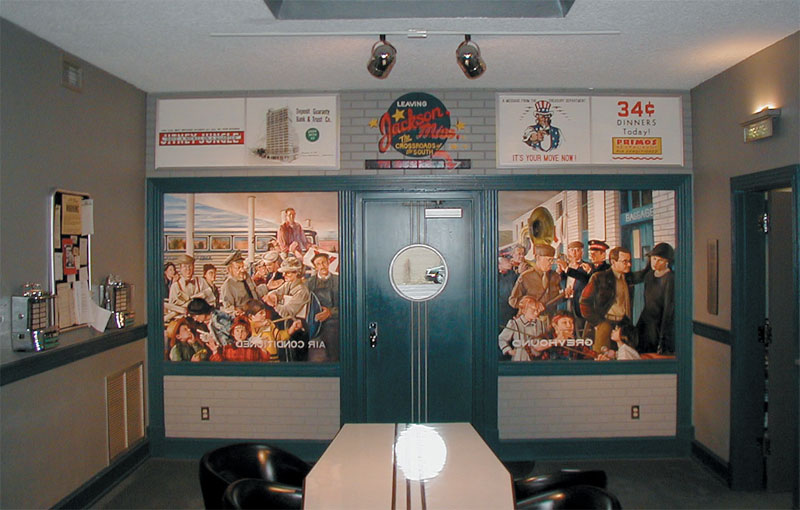 During our time in Jackson, Mississippi we made a quick stop at the Greyhound Bus Station, which served as the destination for the Freedom Riders in 1961. Many of the participants were arrested and jailed at the notorious Parchman Prison. The city boasts a modern bus station, but in 1988 the old facility was renovated by Renovation Architect, Robert Parker Adams. The building now serves as his firm’s office. Mr. Adams graciously welcomed our group and personally led us through the building. His tour focused mainly on the steps taken to preserve the facility and create an efficient work space. It’s quite impressive.

The interior of the station has been renovated to appear as it did during WWII. There is not one reminder of the events that took place in and around the station in 1961. That doesn’t necessarily trouble me, but I am still considering the decision to change one minor aspect of the interior, which is depicted in the mural above. In the 1940s the entrance on the right panel would have read “colored” instead of “baggage.” It was the waiting room for African Americans. A couple of the students asked why this change was made, but Mr. Adams said very little to clarify the decision.

While it may seem like a minor oversight to some, to me it makes all the difference between a renovation meant to capture a piece of history and an attempt at creating feelings of nostalgia without having to be reminded of the blemishes.