Update: Thanks to Stuart W. Sanders, who at one time worked as a docent at the Lee Chapel, for providing some context to this discussion. Update #2: Here is W&L president’s response to “The Committee.” 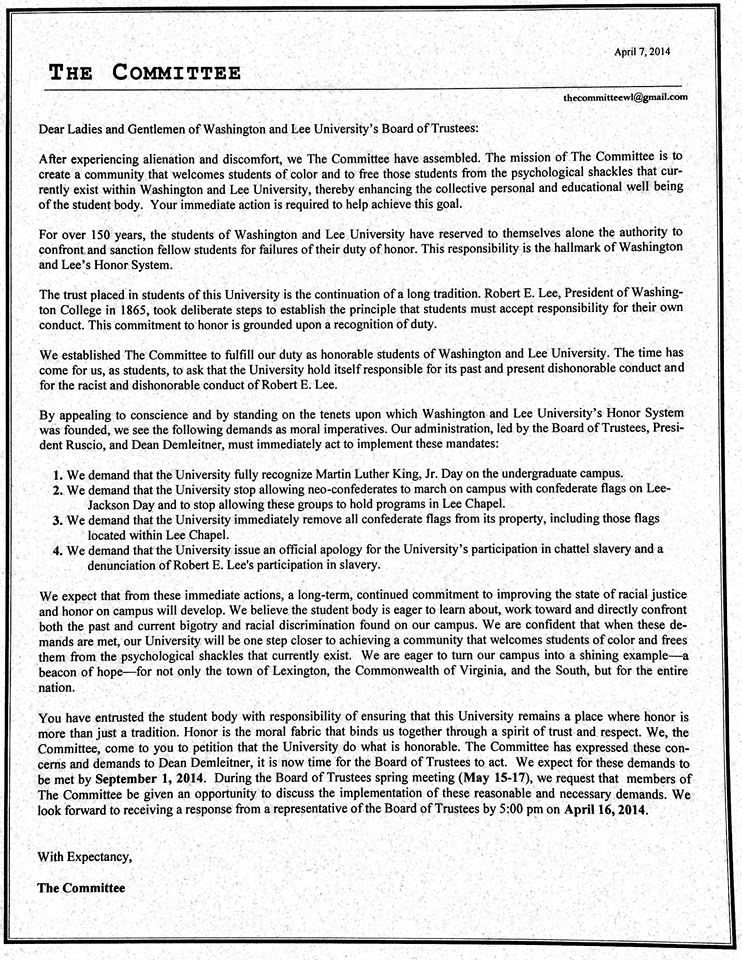 Statement by “The Committee”

I first heard about this story on one of the Southern Heritage Facebook pages, but now a group of black law students at Washington & Lee University, who are demanding that their university distance itself from its Confederate past is gaining some traction [and here]. This push comes on the heels of the steps taken by the city of Lexington to limit the display of the Confederate flag on public property.

The group of students, who call themselves “The Committee” have published a list of demands that includes a formal recognition of MLK Day and an apology from the university for its participation in slavery. They are on shakier ground, in my opinion, with the following two demands.

2. We demand that the University stop allowing neo-confederates to march on campus with confederate flags on Lee-Jackson Day and to stop allowing these groups to hold programs in Lee Chapel.

3. We demand that the University immediately remove all confederate flags from its property and premises, including those flags located within Lee Chapel.

I certainly sympathize with this group of students, but their list of demands goes too far for a college campus. First, college students and administrators should want their campuses to be bastions for the free exchange of ideas in classrooms and other venues.  You will and should be offended while attending college. Students should consider all perspectives regardless of whether they find it offensive, hurtful, dangerous, etc. It’s a little disappointing to read such a demand from a group of law students.

As for the Confederate flag I do not believe that the university should fly it from buildings and other campus locations in a way that can be interpreted as an endorsement. Of course, it doesn’t. The Lee Chapel is a difficult structure to navigate on this score. After all, it is the burial site of Robert E. Lee. There are Confederate flags in the chapel, but there are also flags throughout the museum exhibit below, where they are properly interpreted. Are these students seriously suggesting that all of these flags be removed? Finally, the programs in the chapel on Lee-Jackson Day have feature some of the most respected historians we have, including Gary Gallagher, Robert Krick, and William C. Davis. Why should they not be allowed to speak? And if they feature the most rabid racists then deal with it. Again,

My suggestion is that if students feel this strongly about Robert E. Lee and the Confederate flag then they probably should stay out of the chapel. The school’s historical connection to Robert E. Lee is well documented and could not have been a surprise to its applicants. Again, the school does have a responsibility to ensure that all students feel safe and respected, but this list of demands largely falls short of its mark.