Kickstarter Campaign for “To Appomattox” Dead on Arrival

Update: This post has sparked a discussion over at The Battle of Gettysburg Discussion Group. J. D. Petruzzi, who is an adviser for the film project, is apparently not happy with my comments. I admit that there is much I don’t know and I accept that the script has met the high standards set by the advisers, but in the end what stands out to me is that after four-plus years this film is no closer to being made. This failed Kickstarter campaign speaks volumes regardless of J.D.’s whining. 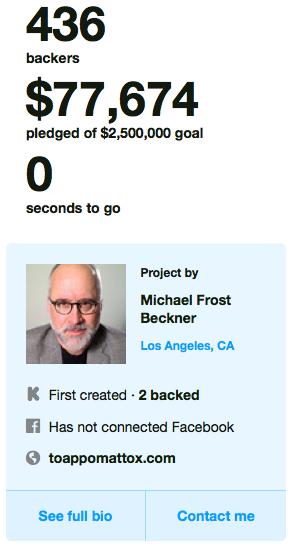 It’s unclear whether Ron Maxwell intends to employ a crowdfunding campaign for his next project. The producers of “To Appomattox” recently attempted to raise money from the general public through Kickstarter and failed to make even a small dent in their goal of 2.5 million dollars. [The contributions of four totaled $30,000.] I am not surprised.

I first heard about this production back in 2011 and there was a lot of buzz. Producers managed to attract a fairly impressive cast and a number of historians/bloggers signed on as advisers. You may remember their attempt to brand the project with the backing of NASCAR, which at the time I thought was somewhat curious.

The fundamental problem from the beginning was that the producers set out to make a film for the Civil War community. That’s not the way you do it. You make a film that tells a compelling story that will attract moviegoers or keep viewers tuning in over the course of a few weeks. Band of Brothers was not made for the WWII community. Spielberg’s Lincoln was not made for Civil War buffs.

I will be very surprised if we hear anything more about this project. For now, let’s not write this off as another example of our supposedly “anemic” sesquicentennial. This was likely a mismanaged project from the start.

Next post: Sons of Confederate Veterans Whip a Florida Crowd Into Shape