“From the Colored Citizens of Virginia” 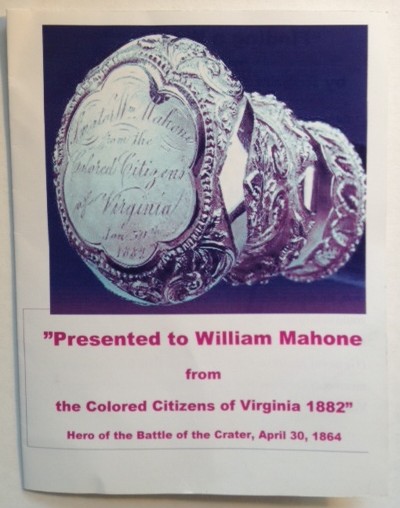 As you might imagine, William Mahone was front and center last week in Petersburg for the 150th anniversary of the battle of the Crater. His memory looms large over the history of the battle as well as how the battle was remembered after the war. I talked quite a bit about Mahone’s postwar political career as leader of the Readjuster Party as well as his attempts to use the memory of the battle to further his interests. As you will see on August 20 (when C-SPAN will broadcast the talk) the Q&A following the talk was dominated by the audience’s interest in Mahone and I was more than happy to oblige.

Earlier that morning during a panel discussion on the battle a gentleman, who styles himself a local historian, handed out a little pamphlet that featured a cane with a silver tip that was given to Mahone as a gift by a group of black Virginians. This short leaflet includes some choice quotes and commentary that this individual believes reflects a close relationship between Mahone and the black community. The danger, of course, is that this ring can be used to draw any number of conclusions without attention to proper historical context. And context is everything in this case.

Yes, Mahone and the Readjusters forged the most powerful bi-racial political party in the postwar South, but it is important to keep in mind that this coalition was not inevitable. Neither the Readjusters nor the Funders at first approached the black community. In other words, the Readjuster Party was not established in an attempt to better the lives of Virginia’s black population. The alliance was one of necessity and the results were revolutionary. The black community understood that their political victories were tenuous and depended on their ability to maintain strong ties with their fellow white Readjusters and demonstrate the necessity of maintaining those ties. Robert A. Paul understood the irony of a former Confederate general, who now sought to advance the political power and rights of the state’s black population.

The date on the tip of the cane is absolutely crucial. By that time the Readjusters had been in power for three years. Mahone faced constant criticism from fellow veterans and many throughout the state believed that he had betrayed the white race by advancing the cause of blacks. There was strong pressure to end the party’s alliance with the black community. The Readjusters, in fact, did lose control of the state following what some believe were staged racial acts of violence in Danville and a few other cities. By the early 20th century the advances that black Virginians enjoyed were largely gone following passage of a new constitution in 1903.

From this perspective the cane reflects a sense of desperation among the “colored citizens of Virginia.” I’ve said before that William Mahone is the most important Virginia politician in the nineteenth century after Thomas Jefferson and he definitely deserves a new biography. Well, it looks like one is in the works. John F. Chappo’s recent dissertation, completed at the University of Southern Mississippi, is under review at an academic press. Great news.

It goes without saying that this little pamphlet does not even begin to approach the complexity of the relationship between Mahone and the black community, though it may help at least one individual in Petersburg to sleep at night.