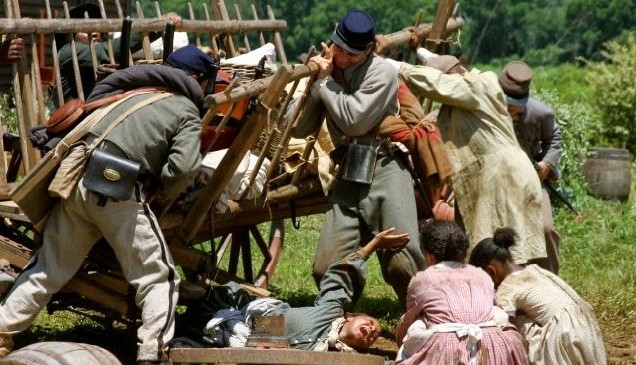 Update: Robert Moore has a post up that takes issue with aspects of this little review. It’s worth reading, though I am not sure what exactly Robert takes issue with re: my reference to “Old Judge.” I don’t doubt that there are aspects of his portrayal that reflect available sources. [There are passages in the quoted postwar source by Wise that beg for interpretation.] What I take issue with is the way in which the slave’s portrayal fits into the broader goal of getting these boys right on the issue of race and slavery.

The film, “Field of Lost Shoes”, is currently available on YouTube (at least for now). I watched it a couple of days ago and even though I’ve read some negative reviews I had hopes that there would be some redeeming qualities. Well, I was wrong. The movie tells the story of a small group of VMI cadets that includes Moses Ezekiel, John Wise (son of Henry Wise), and Garland Jefferson (yes, that Jefferson).

The story of VMI and the battle of New Market, which took place in May 1864 is well known to Civil War enthusiasts and actually offers a promising window into a number of aspects of the war. Unfortunately, the narrative fails to do anything more than reinforce tired Civil War cliches such as the young soldier going who is forced to abandon his new love for the battlefield and Ulysses S. Grant as the war’s butcher.

Even more disappointing is the movie’s obsession with getting these young VMI cadets (and by extension, Confederate soldiers and the Confederacy itself) right with slavery and race. In the opening scene we see a young John Wise exposed for the first time to the sale of a slave family in Richmond. At VMI the cadets befriend “Old Judge”, who is a slave on the school’s campus. The boys both fear and respect this individual. While on march “down” the Shenandoah Valley on what will be their rendezvous with destiny at New Market the cadets help a female slave, who is trapped under a collapsed wagon.

It all reminds me of the movie, “Shenandoah.” No one seems to care about the maintenance of a slave society. In fact, every effort is made to place the main characters on a trajectory toward seeing the immorality of it all.

The whole thing is an absolute Lost Cause mess.