Update: A member finally pointed out that the individual is a USCT.

I visit a couple of Facebook pages devoted to the black Confederate soldier. These sites are useful for a number of reasons. Most importantly, they provide a space for those individuals who are convinced of their existence to share their ideas over time and often in response to news stories. The other reason I visit is because a number of members post interesting items, such as newspaper clippings and other primary sources, to the wall. I have collected literally hundreds of magazine and newspaper clippings, many of which I am using in my book project.

On occasion, these pages can be very entertaining in a disturbing kind of way. Since anyone can post and/or comment these sites often highlight the sheer ignorance of its members. One rarely sees any attempt at serious interpretation and more often than not what is seen is what is believed.

Take this recent post of a grievously wounded and tired Civil War veteran. He certainly looks like he is wearing a gray uniform. 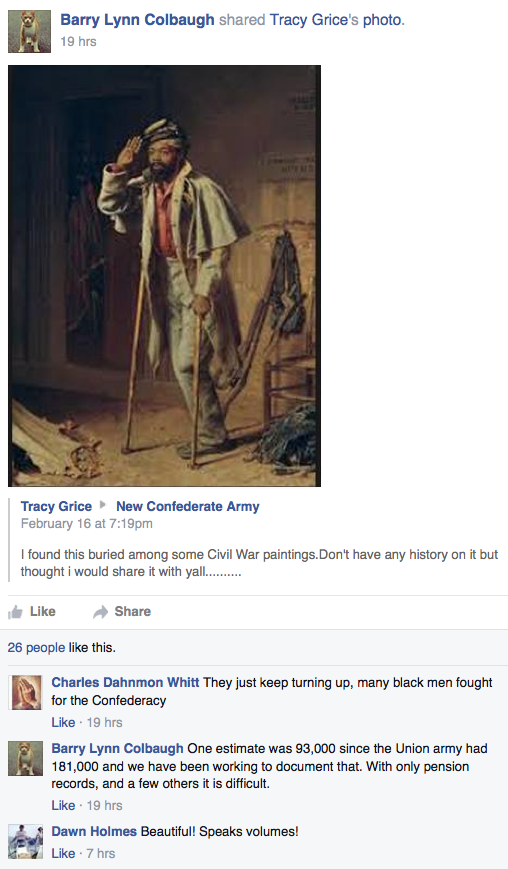 I am sure that if I waited a few hours we would see many more comments affirming the original assumptions of the post as well as other self-congratulatory comments and reminders that they alone are pushing back against the revisionists who insist on denying this important history.

Of course, as many of you know this is not a Confederate veteran. It is one of three images painted by Thomas W. Wood (c. 1865-66) titled, A Bit of History: The Contraband; The Recruit; The Veteran.

The three images documents the evolution from slave to soldier to veteran. It served as a powerful reminder of the crucial role that African-American men played in saving the Union as well as ending slavery through their own efforts. Finally, it raised the question of what black freedom and service to country would mean in a reunited nation.

Andy Hall recently documented another example of black Union soldiers misidentified as Confederates. I agree with his assessment: “Dumb as a Box of Rocks.”