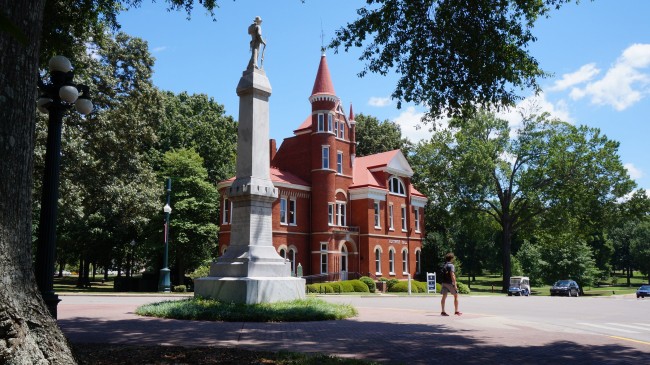 Earlier this year the University of Mississippi announced plans to place an interpretive plaque at the site of the Confederate soldier statue on campus. It created a bit of a buzz on campus and led to the university’s History Department issuing its own alternative interpretation. As indicated in the first link above, I also expressed some concern about the plaque.

The original interpretation reads as follows:

As Confederate veterans were passing from the scene in increasing numbers, memorial associations built monuments in their memory all across the South. This statue was dedicated by citizens of Oxford and Lafayette County in 1906. On the evening of September 30, 1962, the statue was a rallying point where a rebellious mob gathered to prevent the admission of the University’s first African American student. It was also at this statue that a local minister implored the mob to disperse and allow James Meredith to exercise his rights as an American citizen. On the morning after that long night, Meredith was admitted to the University and graduated in August 1963.

This historic structure is a reminder of the University’s past and of its current and ongoing commitment to open its hallowed halls to all who seek truth and knowledge and wisdom.

Today, Chancellor Jeffrey Vitter announced that the school will re-interpret the site with the following:

As Confederate veterans were dying in increasing numbers, memorial associations across the South built monuments in their memory. These monuments were often used to promote an ideology known as the “Lost Cause,” which claimed that the Confederacy had been established to defend states’ rights and that slavery was not the principal cause of the Civil War. Residents of Oxford and Lafayette County dedicated this statue, approved by the university, in 1906. Although the monument was created to honor the sacrifice of local Confederate soldiers, it must also remind us that the defeat of the Confederacy actually meant freedom for millions of people. On the evening of September 30, 1962, this statue was a rallying point for opponents of integration.

He went on to say that the “historic statue is a reminder of the university’s divisive past” and that the school “draws from that past a continuing commitment to open its hallowed halls to all who seek truth, knowledge, and wisdom.” I am pleased to see that the work carried out by the department helped to shape this new interpretation.