For those of you who need a translation of the newspaper headline, it reads “Gone With the Wind.” Very appropriate, indeed. 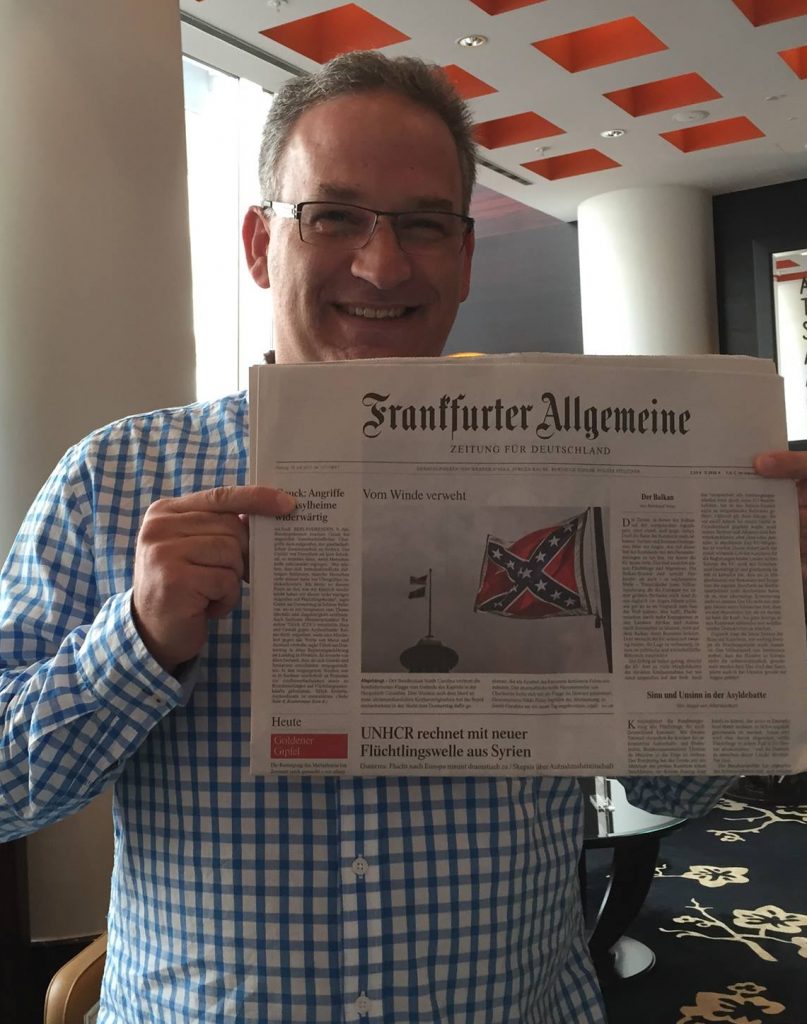 This coming Sunday marks the one-year anniversary of the removal of the Confederate battle flag on the state house grounds of Columbia, South Carolina. At the time I was in Frankfurt, Germany, but as you can see their newspapers gave it front page coverage. To mark the anniversary a group calling itself The South Carolina Secessionist Party will hold a rally calling for the flag to be returned.

If the organization itself wasn’t enough to disgust you, included in its list of speakers is Kirk Lyons of the Southern Legal Resource Center, whose activities within white supremacist circles is well documented. Also scheduled to speak is Susan Hathaway of the Virginia Flaggers, which has welcomed more than one white supremacist, including Matthew Heimbach into its ranks. Heimbach recently made news owing to his organization’s presence at a rally in Sacramento, California, which turned violent.

I am finished with innocently approaching people who fly Confederate battle flags to inquire into their motivation. From now on I am going to assume the worst or at least that its display has nothing to do with remembering a Confederate ancestor or the soldiers more generally. In fact, the vast majority of stories that I have tracked over the past year, involving the Confederate battle flag, have nothing directly to do with history.

Not too long ago I would have agreed that there are settings in which the battle flag can be displayed, which do not conjure up its more recent history as a symbol of resistance against civil rights and white supremacy. [Let me be clear that I am in no way denying that the battle flag must be understood as tied directly to the cause of a nation pledged to protect slavery and white supremacy between 1861 and 1865.] Apart from displaying original flags in a museum setting I no longer believe this to be the case. In fact, I would go so far as to wish for the day when the battle flag is no longer allowed on National Park battlefields. And yes, I am aware of the First Amendment.

It is a toxic symbol that no decent person – even for someone who wishes to recognize his/her Confederate ancestors – would wish to be identified with.

There is no need to organize counter-protests for this weekend’s rally in Columbia. The crowd that this organization and its list of speakers will attract should be sufficient to drive home for the rest of us why taking the flag down was the right thing to do. It can only result in even more flags coming down.

Next post: A Confederate Flag Unfurled and Furled Again in S.C.