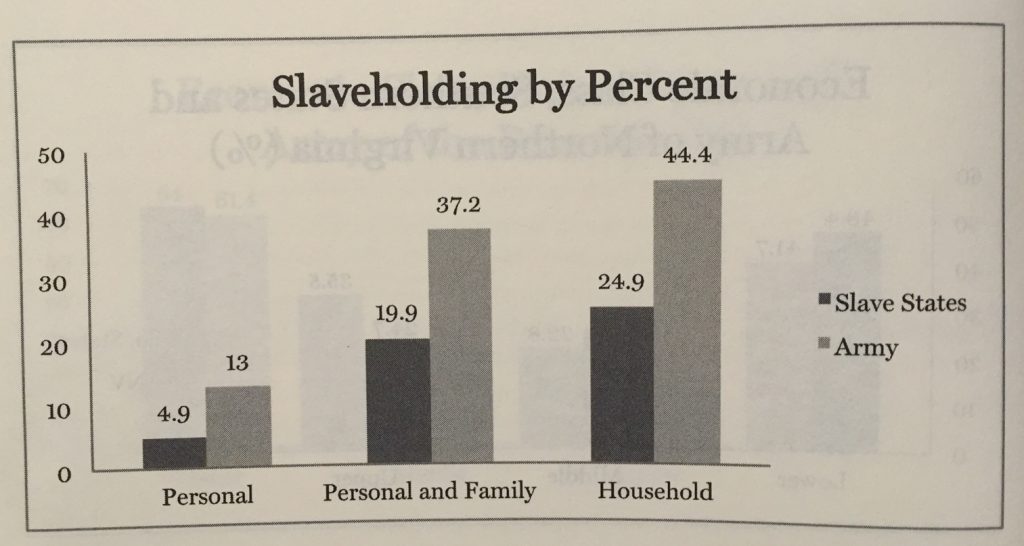 The latest issue of the Journal of the Civil War Era (September 2016) includes Joseph Glatthaar’s Robert Fortenbaugh Memorial Lecture, which compares the cultures in the Army of the Potomac and Army of Northern Virginia. The essay includes a number of helpful graphs, including the one above, which shows that slaveholders were over represented in Lee’s army compared with the rest o the slave states.

Here is Glatthaar’s analysis from his essay:

Certainly one of the most powerful pieces of evidence for motivation among soldiers in the Army of Northern Virginia was slaveholding. Southerners seceded largely to protect their property rights in slaves and their right to take that property (slaves) into the territories. Mississippi, for example, officially justified secession with the words “Our position is thoroughly identified with the institution of slavery–the greatest material interest of the world.” Slaveholding had a powerful grip on Robert E. Lee’s army. While one in eight soldiers was a slaveholder, personal and family slaveholding essentially doubled the statistic for the slave states in general–totaling thee in every eight (37.2%) soldiers compared to one in five (19.9%). Four in ever nine soldiers (44.4%) lived in slaveholding households. Add to that those who had family members who were slaveholders, those who worked as overseers, and those whose business derived largely from slaveholders, and well over half fell into that category of attachment to slavery. Because of the overwhelming percentage of enlisted men compared to officers, 89.7% of all personal and family slaveholders in Lee’s army served exclusively as enlisted men–privates, corporals, and sergeants. Even poor whites supported slavery. Emancipation would result in economic competition from newly freed blacks. Racism reinforced that hostility by elevating poor whites and suggesting that someday, they, too, might be able to own slaves. [pp. 320-21]

For those of you familiar with General Lee’s Army: From Victory to Collapse and its companion volume this analysis is nothing new.

It is worth raising in light of the popularity of the movie, Free State of Jones. This is not a criticism in any way of the movie, but is worth reminding people that slavery may have united white southerners across the Confederacy more than it worked to divide them in specific places such as Jones County.