Thanks to all of you who have offered suggestions on how to improve #NOLASyllabus. The list has expanded and deepened in a number of ways, though I am still trying to get a sense of where it is going. Please keep them coming.

Certainly the most exciting part are the references that I most likely would never have come across on my own. Consider the following reference to a 1931 issue of The Crisis in which W.E.B. DuBois offers some brief remarks about Confederate monuments while traveling through parts of the South. 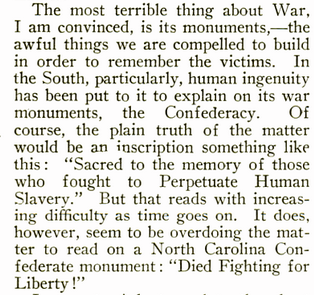 DuBois’s reflection on the selective memory and history of Confederate monuments comes right in the middle of a narrative on the challenges and contradictions of traveling through the South at the height of the Jim Crow era.

DuBois pushes right back against the myth of the Lost Cause. He refuses to draw a distinction between the Confederate government and the men in the ranks. DuBois clearly understood that as long as white southerners were able to mythologize the war through their monuments, African Americans would remain second class citizens.

Confederate monuments did not just occupy the Jim Crow landscape. For Dubois, they helped to make it possible.