In Texas, Even the Lies about the Confederacy Are Bigger

Republican House Speaker Joe Straus is calling for the removal of this marker, which was installed by the Texas Division, Children of the Confederacy, in the state Capitol in 1959, on the eve of the centennial. It makes a pretty bold claim about the role of slavery in causing secession and war. 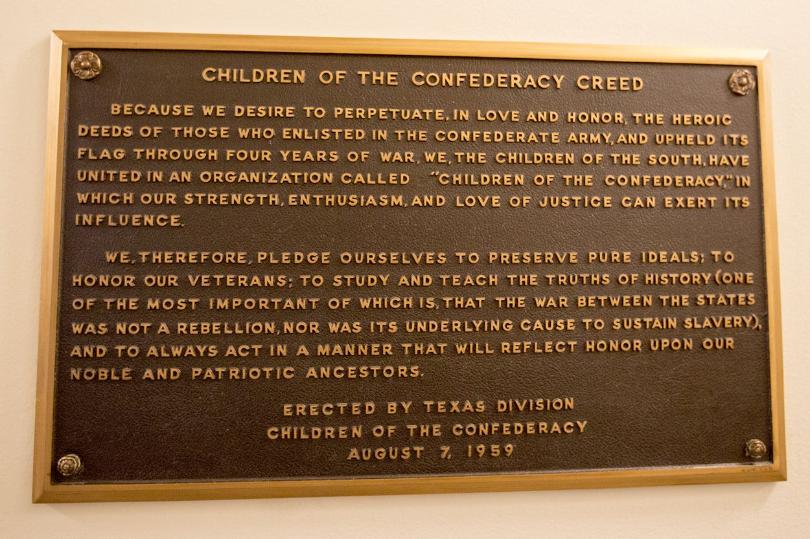 Texas is no stranger to controversies about how history is taught and efforts to shape history textbooks to fit the political agendas of various school boards. In this case all one has to do is look to the states own Declaration of Causes, which propelled the state to leave the union in February 1861. This link will take you to the Texas State Archives and Commission website [a .gov site]. Here is a taste:

For years past this abolition organization has been actively sowing the seeds of discord through the Union, and has rendered the federal congress the arena for spreading firebrands and hatred between the slave-holding and non-slave-holding States.

By consolidating their strength, they have placed the slave-holding States in a hopeless minority in the federal congress, and rendered representation of no avail in protecting Southern rights against their exactions and encroachments.

They have proclaimed, and at the ballot box sustained, the revolutionary doctrine that there is a “higher law” than the constitution and laws of our Federal Union, and virtually that they will disregard their oaths and trample upon our rights.

They have for years past encouraged and sustained lawless organizations to steal our slaves and prevent their recapture, and have repeatedly murdered Southern citizens while lawfully seeking their rendition.

They have invaded Southern soil and murdered unoffending citizens, and through the press their leading men and a fanatical pulpit have bestowed praise upon the actors and assassins in these crimes, while the governors of several of their States have refused to deliver parties implicated and indicted for participation in such offences, upon the legal demands of the States aggrieved.

They have, through the mails and hired emissaries, sent seditious pamphlets and papers among us to stir up servile insurrection and bring blood and carnage to our firesides.

They have sent hired emissaries among us to burn our towns and distribute arms and poison to our slaves for the same purpose.

They have impoverished the slave-holding States by unequal and partial legislation, thereby enriching themselves by draining our substance.

They have refused to vote appropriations for protecting Texas against ruthless savages, for the sole reason that she is a slave-holding State.

We hold as undeniable truths that the governments of the various States, and of the confederacy itself, were established exclusively by the white race, for themselves and their posterity; that the African race had no agency in their establishment; that they were rightfully held and regarded as an inferior and dependent race, and in that condition only could their existence in this country be rendered beneficial or tolerable.

That in this free government all white men are and of right ought to be entitled to equal civil and political rights; that the servitude of the African race, as existing in these States, is mutually beneficial to both bond and free, and is abundantly authorized and justified by the experience of mankind, and the revealed will of the Almighty Creator, as recognized by all Christian nations; while the destruction of the existing relations between the two races, as advocated by our sectional enemies, would bring inevitable calamities upon both and desolation upon the fifteen slave-holding States.

This is a good day for Texas and American history. I am just grateful that Straus did not propose changing references to slavery to “workers.”

Next post: *Interpreting the Civil War* Now On Sale