South Cumberland Elementary School Remembers the Confederacy With a Lynching

Update: Thanks to Dan Weinfeld for sending along this link, which identifies Crossville, Tennesse as a possible Sundown Town. This certainly adds some important historical context to this particular discussion.

It would be easy to conclude that the backlash against Confederate monuments and the battle flag has died down since this past summer. You would be wrong. Public schools named after Confederate leaders or that embrace the “Rebel” mascot remain on the front lines of this debate. In recent weeks school systems in Petersburg, Virginia and Austin, Texas have joined numerous other counties across the country in renaming buildings that honor Confederate leaders.

Than there is South Cumberland Elementary School in Crossville, Tennessee. Crossville embraces its Confederate identity with a large battle flag painted on the wall in the school’s gymnasium along with this lovely scene located on an adjacent wall. That’s right. The teachers and administration believe that this is an appropriate scene to represent their values as a school community. 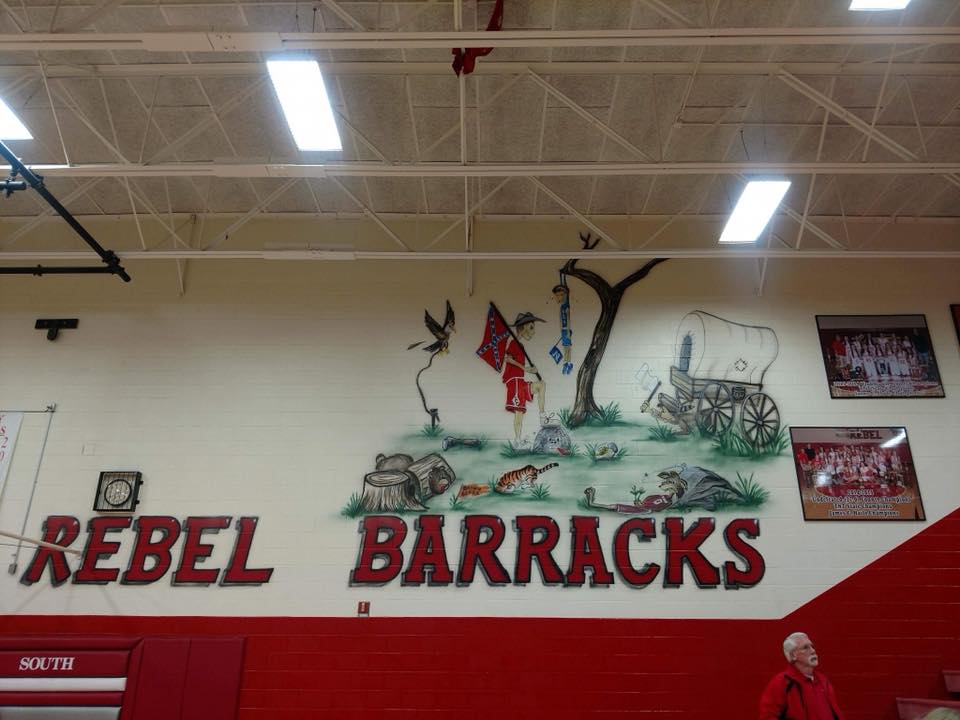 It is not known how long the mural has been up, but over night administrators ordered that it be modified after photographs surfaced on social media.

Regardless of where the community stands on this issue, this is as clear an example of teachers and administrators failing their students as you will find. It’s as if the images of Dylann Roof posing with a Confederate battle flag and the heinous murders in Charleston never happened just a few short years ago.

But it’s even worse. Crossville, Tennessee was recently chosen as a gathering place for the white supremacist group Stormfront. I am willing to wager that the Confederate battle flag was visible that day.

Over the past few months I have worked closely with teachers and students around the country to better understand the history and memory of the Civil War as well as the ongoing debate about Confederate symbolism. Those visits have included schools that still embrace the Rebel mascot, but I have never seen such an egregious example such as the mural above.

It leaves me to wonder whether the teachers and administrators know anything about the history of the Confederate battle flag and how it has been embraced over the past 150 years to maintain white supremacy. Teachers, administrators, students (and their parents) would do well to learn a little bit about the lynching of Will Echols in Mississippi in 1920, who was forced to kiss a Confederate battle flag before he was murdered. They would also do well to study how the flag was used as symbol of “Massive Resistance” against the civil rights movement during the 1950s an 60s.

Are these the values that South Cumberland Elementary School embraces?

Modifying this mural is certainly the right thing to do, but this is a school community that should go further and begin a discussion about whether it is time to cut its ties to Confederate iconography altogether.

Next post: About Those Confederate Flag Murals in Crossville, TN