Over the years the neo-Confederate community has relied on a short list of narratives purporting to demonstrate the existence of significant numbers of loyal black Confederate soldiers. One of them centers on an interview Nathan Bedford Forrest gave in 1868.

When I entered the army I took forty-seven Negroes into the army with me, and forty-five of them were surrendered with me. I said to them at the start: ‘This fight is against slavery; if we lose it, you will be made free; if we whip in the fight, and if you stay with me and be good boys, I will set you free. In either case you will be free. Those boys stayed with me, drove my teams, and better confederates did not live.

Notice that Forrest was careful in the way he characterized these men. They were not at any time referred to as soldiers, but as loyal slaves fighting side by side with white men in a cause that united both races. As you will read in my forthcoming book on the subject, former Confederates almost never referred to impressed slaves and even personal body servants as soldier.

This narrative fits neatly into the burgeoning Lost Cause narrative. We’ve always known that these black men were impressed slaves, but without easy access to the relevant primary sources their status has always been easy to manipulate by those looking to muddy the distinction between slave and soldier and as a result vindicate the Confederacy.

Thankfully, the National Archives is now in the process of digitizing the Confederate slave payrolls. We now know that Forrest was paid by the Confederate government for the slaves that rode with him during the war. Like tens of thousands of other black men, these were impressed men forced into the army. Their legal status never changed during the course of the war. 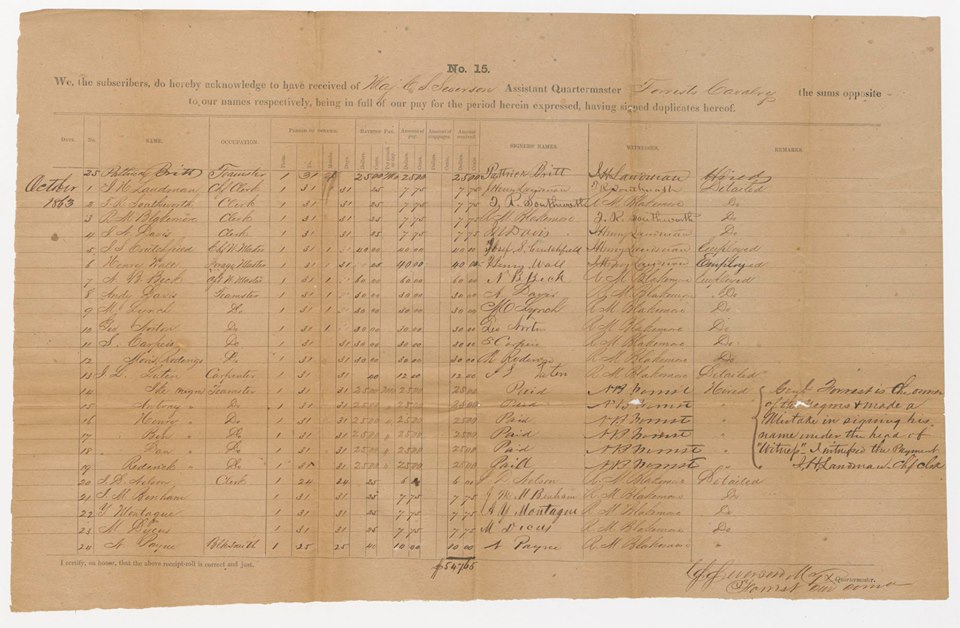 Most of the slave payrolls available relate to wartime transactions in Virginia and North Carolina. If you are looking to contextualize these sources, I highly recommend Jaime Martinez’s wonderful book, Confederate Slave Impressment in the Upper South (University of North Carolina Press).

This will be an invaluable source to those researching how slave labor was utilized throughout the war.