I can already anticipate the response to Searching for Black Confederates: The Civil War’s Most Persistent Myth in certain quarters. I am going to be asked to respond to newspaper accounts in northern newspapers referencing armed black men; pension documents that upon closer inspection are clearly marked for former body servants or camp slaves; muster sheets that cite the presence of cooks in the army. We’ve seen all this before ad nauseam. It is almost always unaccompanied by any attempt at interpretation beyond an implicit assumption that the Confederacy could not have been fighting to protect the institution of slavery. It is the ultimate non-starter that gets us no closer to understanding the history of the Confederacy and the role of African Americans in the army. Even more unfortunate, however, is that such an approach leaves little room to probe case studies that complicate our understanding of Confederate military regulations and expectations surrounding race. 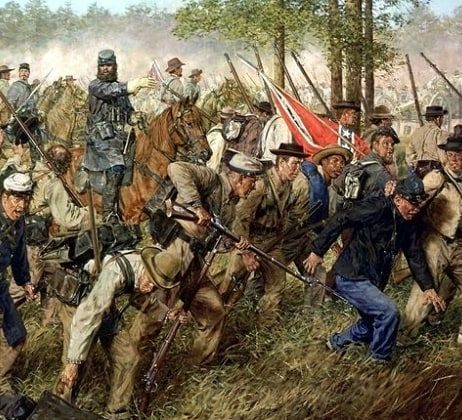 Consider, for example, Levi Miller, who was issued a Virginia Confederate veteran’s pension in 1907, seventeen years before the state expanded its program to include body servants, impressed laborers, and teamsters. Miller entered the war as the camp slave of Captain John J. MacBride of Company C, 5th Texas Infantry Regiment. His name can be found on muster sheets in the section set aside for cooks, servants, and musicians, but by 1864 he occupied a unique place in the regiment. Muster sheets dated to the bloody campaigns of the Wilderness and Spotsylvania Court House in the spring of 1864 have him listed as a private. Decades later Miller was recalled to have been ” elected to the rank of private”—a ceremonial move likely made in acknowledgment of his loyalty to his master and conduct in camp.

According to his pension application, Miller claimed that he was “engaged in combat with the Army of Northern Virginia in their operations in Tennessee, Georgia, as well as in Virginia until surrendering with the rest of the company at Appomattox.” Miller’s affidavit was secured from none other than the company commander, Captain J.E. Anderson, who roughly forty years later spoke of him as he had served as a soldier: “Levi Miller stood by my side and [no] man never fought any better than he did, and when the enemy tried to cross our little breastworks, and we clubbed and bayoneted them off, no one used his bayonet with more skill and effect than Miller.

There can be little doubt that Miller occupied a unique place in his unit and that he assumed many of the roles of a soldier, most importantly as a battlefield combatant. Obituaries published after his death on February 25, 1921, followed Anderson in praising Miller’s conduct on the battlefield, but they tended to frame his life as they would have for any former slave who was present with the Confederate army. The Winchester (Va.) Evening Star, for instance, claimed that Miller, “was one of the few colored men regularly enlisted in the Confederate army,” but echoes of the Lost Cause were never far removed: Miller “was affectionately known among the white as well as colored people of this section as the grand old man of his race. He always had a deep love for everything southern, and although born a slave, it was his loyalty to his state that led him to enter the southern army and fight through the four entire years of war.”

Miller’s place in the army straddled the roles of both slave and soldier, but legally he remained the property of John MacBride. It is also worth noting that Miller’s name does not appear on any official lists of the 5th Texas Infantry, which suggests that his status as a soldier was honorary. Miller’s place within the unit by the end of the war had as much to do with the relationship he established with his master as it did with the relationship he formed with the rest of the men in the unit, but his story is unique and ought to be understood as such.

Many will finish reading this and immediately jump to the conclusion that Miller was indeed a Confederate soldier. No one in the army or on the home front during the very public and divisive debate about slave recruitment in 1864-65 cited Levi Miller or anyone else in his position as evidence that black men were already serving as soldiers. Based on the available evidence it is clear that he was never enlisted as a soldier. Miller remained a camp slave and was freed only as a result of Union victory in 1865.

But if we put aside the narrow question of whether Miller was a soldier we see a much more interesting story that deserves further study. My overall argument in the first two chapters of the book that focus on the war years is that the challenges of camp life, long marches, and even the battlefield itself altered the relationship between master and slave in profound ways. I see Levi Miller as a prime example of this phenomenon.

My book will not be the last word on this subject. In fact, one of the things I hope the book does is open up avenues for further research. As we get closer to publication date I will share other areas that arose in the course of my research and writing that deserve further attention from people who are serious about better understanding how slaves were utilized in the Confederate military.

Previous post: Pre-order *Searching for Black Confederates* at a 40% Discount