Some Thoughts About Teaching Reconstruction or Why Is History So Damn Depressing? 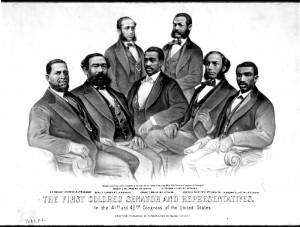 It happens every year in at least one of my classes and usually around the time of Reconstruction. One of my students comments or asks a question that reveals a deep frustration with American history and particularly the role of racism in it. And when the issue is raised everything stops in my class to discuss the issue. I tell my students at the beginning of the year that one of the main topics or themes covered in the course is the history of racism — in my opinion the most important issue that I can teach my students. The problem, of course, is the danger that you leave students with a sense that American history is one long tale of corruption and racial hatred.

Part of the problem is that most of my students have never seriously studied the history of racism. I teach in a predominantly white private school with very few black employees and the students are from fairly wealthy families in predominantly white neighborhoods. All of this lends itself to a certain level of defensiveness whenever the topic is raised. Some students no doubt feel threatened or believe they are being made to feel partly responsible for the past. It is difficult to make clear to the students that the goal is to understand how societies develop along racial lines so that we can more clearly address the nature of the problem. How did colonization, the cultivation of tobacco, the demand for rich land, and a labor force shape a slave nation by the middle of the 18th century? Throughout it all I try my best to make it clear that black slaves never surrendered some level of autonomy, but continually negotiated and took advantage of opportunities for self expression and autonomy. The point I am trying to make is that a close look at racism and slavery can be taught in a way that reflects the kind of story that most Americans relish in, which is the desire for freedom involving stories of individuals and groups and the lengths they are willing to go to achieve their ends.

Reconstruction is a perfect opportunity to make this point as clearly as possible to my students. Most of our time in class is spent analyzing how black and white Americans worked together to achieve certain political ends during the turbulent period following the Civil War. The story in and of itself includes all of the components that make for the quintessential American story. Yes, the story ends with the Redeemers back in power, but that did not end black political action – a point that C. Van Woodward reminded us over 50 years ago in Origins of the New South: 1877-1913 and one that I am still learning about as it relates to the Readjusters here in Virginia. The history should be taught not simply to reveal the hideousness of racism, but also as part of the exciting story of American freedom. The trick is to bring my students to the point where they see themselves in the slaves and the newly-freed blacks in the same way that many white Americans have traditionally identified with the Founding generation. In short, these are stories that can empower young people.