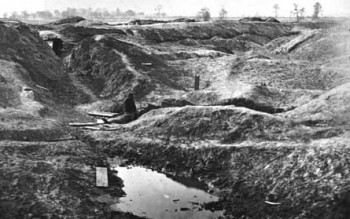 I’ve been reading the wartime journal Eliza Frances Andrews, (b. 1840) titled The war-time journal of a Georgia girl, 1864-1865 (1908).  Most of it concentrates on events in Georgia, specifically Sherman’s “March” but in the preface Andrews provides a wonderful overview of how white Southerners – and by this time much of the rest of the country – had come to view the war.  In doing so she references the Crater.

The diary was written in a time of storm and tempest, of bitter hatreds and fierce animosities, and its pages are so saturated with the spirit of the time, that to attempt to banish it would be like giving the play of Hamlet without the title-role. It does not pretend to give the calm reflections of a philosopher looking back dispassionately upon the storms of his youth, but the passionate utterances of stormy youth itself. It is in no sense a history, but a mere series of crude pen-sketches, faulty, inaccurate, and out of perspective, it may be, but still a true picture of things as the writer saw them. It makes no claim to impartiality; on the contrary, the author frankly admits that it is violently and often absurdly partisan – and it could not well have been otherwise under the circumstances. Coming from a heart ablaze with the passionate resentment of a people smarting under the humiliation of defeat, it was inevitable that along with the just indignation at wrongs which ought never to have been committed, there should have crept in many intemperate and indiscriminate denunciations of acts which the writer did not understand, to say nothing of sophomorical vaporings calculated now only to excite a smile. Such expressions, however, are not to be taken seriously at the present day, but are rather to be regarded as a sort of fossil curiosities that have the same value in throwing light on the psychology of the period to which they belong as the relics preserved in our geological museums have in illustrating the physical life of the past. Revolutions never take place when people are cool-headed or in a serene frame of mind, and it would be as dishonest as it is foolish to deny that such bitternesses ever existed. The better way is to cast them behind us and thank the powers of the universe that they exist no longer.

I cannot better express this feeling than in the words of an old Confederate soldier at Petersburg, Va., where he had gone with a number of his comrades who had been attending the great reunion at Richmond, to visit the scene of their last struggles under “Marse Robert.” They were standing looking down into the Crater, that awful pit of death, lined now with daisies and buttercups, and fragrant with the breath of spring. Tall pines, whose lusty young roots had fed on the hearts of dead men, were waving softly overhead, and nature everywhere had covered up the scars of war with the mantle of smiling peace. I paused, too, to watch them, and we all stood there awed into silence, till at last an old battle-scarred hero from one of the wiregrass counties way down in Georgia, suddenly raised his hands to heaven, and said in a voice that trembled with emotion: “Thar’s three hundred dead Yankees buried here under our feet. I helped to put ’em thar, but so help me God, I hope the like ‘ll never be done in this country again. Slavery’s gone and the war’s over now, thank God for both! We are all brothers once more, and I can feel for them layin’ down thar just the same as fur our own.”

That is the sentiment of the new South and of the few of us who survive from the old. We look back with loving memory upon our past, as we look upon the grave of the beloved dead whom we mourn but would not recall. We glorify the men and the memories of those days and would have the coming generations draw inspiration from them.

Andrews is referring to the well-attended 1903 Crater reenactment which was held in Petersburg and on the actual battlefield.  I have no reason to believe that Andrews was not in attendance that day, but the event was widely covered by all the major newspapers so she would have had every opportunity to read stories such as the one outlined above.   What is so striking to me is the tension that persist between the acknowledgment of her strong emotions during the war and the way she prefers to remember the war later in life.  One could challenge the implicit assumption that “cool headed” necessarily implies some form of objectivity as opposed to her “sophomorical vaporings.” [I am going to try to use that phrase today at some point.] While her memory of the war in 1908 is not being fueled by the same passions of youth and harsh realities of war it is clear that the references to reunion and the hope that “coming generation draw inspiration” from the men on both sides were influenced by factors equally salient.

Previous post: Where To Study The Civil War In Graduate School