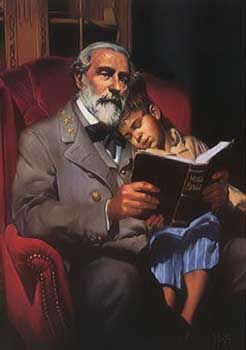 It never ceases to amaze me, but every year I get the same questions when my classes study the Civil War.  Yesterday it was, “Is it true that Grant was a butcher?”  Luckily I get to address that one head on today.  In one of my other classes a student asked if it was true that Confederates were more religious than their Northern opponents.  That I am asked these same questions every year reflects the attractiveness of these assumptions.  It doesn’t take much of an imagination to figure out why these ideas remain so popular.  To the left is painter John Paul Strain’s “Battlefield Prayer,” which includes Lee, Jackson, and Stuart, though it  looks more like a bad impersonation of James Longstreet by Tom Berringer.  Why all three, along with a “Johnny Clem-type” flag bearer, are in the woods alone praying is beyond me.  To the right is my all-time favorite.  This is a painting by Mort Kunstler that shows Lee and Jackson engaged in intense prayer along with two unknown children.  I guess it doesn’t matter who the kids are, but I’m not sure I would leave them in the hands of strangers – even if they are “Christian Cavaliers.”  You can also see these assumptions at work in a number of recent books written by people who have apparently no training in the process of writing history.  Here is an example:

J.E.B. Stuart, The Christian Cavalier: For non-believers, death is often considered the end of all things, but, to Christians, it represents a new beginning. Our time here on Earth is short compared to eternity in Heaven, and what we do with this time determines our reward in the afterlife. Unfortunately, many people today waste their precious time focusing on self-fulfillment. Sadly, few leave behind a meaningful legacy. A legacy is the memory of who we were and the ways in which we touched the lives of others. History has recorded countless men who served their time on Earth in such an inspirational way. Their legacy continues to live on, years and years after their death. Such is the story of J.E.B. Stuart: soldier, servant, and Southern hero. In the end, it was far more than the service record, personal items, horses, and other accoutrements that Stuart left behind. It was the deep spiritual roots and patriotism that he had instilled in his children and his men. These are the memories that have truly made his story unforgettable.

Captain R. E. Frayser, from Stuart’s staff recalled the impact that his beloved commander had on all who knew him when he wrote, “In this short period of thirty-one years, four months and twelve days, he won a glorious and imperishable name, and one that posterity will delight to cherish and honor.”

The emphasis is my own and I did so to highlight the broad strokes that typically accompany these kinds of “studies.”  Does this characterization of Stuart have any basis in the history?  According to Stuart biographer Emory Thomas the answer is no: “During his first year at Emory & Henry a campus religious revival swept James into the Methodist Church.  At home at Laurel Hill, James’s mother had been an Episcopalian, his father was probably Presbyterian; but apart from Elizabeth Stuart’s moral strictures, James had not had much religious education or background.  And even after his revival experience at Emory & Henry, his letters to family and friends contain few, if any, religious references. (p. 13)  Thomas goes on to mention that many of his military orders did contain references to “Divine Providence.”  I quote Thomas not to challenge the idea that Stuart was not a religious man, but to suggest that the subject is much more complicated than these so-called Christian authors admit.  The biggest problem for many of these studies is the failure to seriously consider the rich secondary literature that addresses the place of religion in nineteenth-century America.  During a recent visit to my local bookstore I noticed a couple copies of Stonewall Jackson: The Black Man’s Friend by Richard Williams, which makes constant reference to his religion as evidence of his paternalism towards his slaves.  I spent a few minutes going through the bibliography and was not surprised by the almost complete absence of the relevant secondary literature that covers religion in the antebellum South.

The other problem is the failure to see the role of conditions in the postwar South that reinforced this belief in the myth of the Christian Cavalier.  This is very important because if you are not aware of the political, social, and economic conditions that shaped the way Americans – and in this case white Southerners – chose to remember their leaders than you will not be able to fully interpret the source material.  Historian Peter Carmichael makes this very clear in an essay on Turner Ashby, who many would argue fits neatly into this Christian Warrior category.  [To the right is John P. Strain’s “Black Knight]

Until recently every generation of white southerners since the war has learned, like some catechism, that all Confederates were gallant and moral, that they fought for a Christian nation, and that they protected the honor of their women against barbaric Yankee hordes.  Those who strayed from this dogma often became social outcasts.  Postwar southerners, consequently, came to rely on chivalry as an explanatory device to give meaning to and understanding of the Confederate cause.  No matter how poor their region had become after the Civil War, or how repressive against black people,white southerners could tell themselves that they came from a noble breed….If postwar southerners had examined Ashby as a rural leader who engaged in brutal partisan warfare, they would have overthrown the cavalier tradition and the basic tenets of the Lost Cause.  Few people are capable of stepping outside their experience and critiquing the assumptions of their world.  Over time, however, it should be easier to move away from the mythical Ashby [not to mention Stuart, Jackson, Lee, etc.], to look at his military career within the social context of the Shenandoah Valley, and to see through the romantic haze of the past.  By doing so, one finds a much different war in Virginia, a place where white society was badly divided, where fighting was uncivilized, and where Confederate leaders lived not as saints but as regular people who possessed the virtues and faults of all humans. [“Turner Ashby’s Appeal in The Shenandoah Valley Campaign of 1862 ed. Gary W. Gallagher (pp. 167-69; in addition to Carmichael’s article, see Paul C. Anderson’s excellent book, Blood Image: Turner Ashby in the Civil War and Southern Mind]

I find these so-called Christian biographies to be dangerous because they perpetuate the kinds of myths that divide. The authors may not intend to do this, but the upshot is a reinforcement of stereotypes and divisions that have little if anything to do with history.  When is the last time you came across a book on the Christian virtues of Ulysses S. Grant and William T. Sherman?  I guess we’re satisfied to think of Grant in the voice of Jason Robards.  I know some of my readers are going to conclude that this is evidence of some kind of religious bias.  Well, it’s not.  I am fascinated by the history of nineteenth-century America and especially the South, and religion is an important component to understanding Americans on both sides of the Potomac.  It’s too important to leave to individuals with no real interest or training in the writing of history.  There are plenty of excellent studies that focus specifically on religion; they may not be as exciting as the colorful stories contained in many of these Christian biographies and they may not be personally inspiring.  That said, if you do need inspiration don’t go to the world of historical fantasy, perhaps you should browse the Self-Help section of your local bookstore.

Next post: A Welcome Addition To The Historical Landscape of Richmond