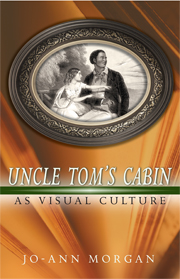 This year I was asked to serve as a judge for the 2008 Peter Seaborg Award, which is given yearly by The George Tyler Moore Center For the Study of the Civil War at Shepherd University. You can assume, based on the other finalists for the award, that the committee’s decision was not easy. It goes without saying that all of these books are must reads for the serious student of the Civil War. Congratulations to Professor Morgan and the other finalists. From the official announcement:

Dr. Jo-Ann Morgan, Associate Professor at Western Illinois University, received the award for her book entitled Uncle Tom’s Cabin as Visual Culture. Published by University of Missouri Press, Morgan’s work reveals how prints and paintings of Uncle Tom and other characters in the novel shaped public perceptions and how this visual culture offered the country a means of both representing and reinventing its slave past. Morgan is currently working on a journal article, “Topsy and Eva: Race, Place, and the Bipolarity of Black and White in Images of Children,” as part of a larger book project on the representation of African American women in the 19th century.