Lee Accepts the Surrender of Grant in His Vicksburg Boots 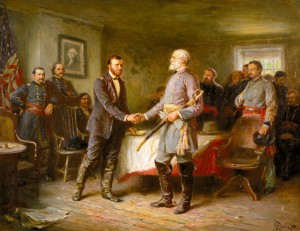 This is my favorite painting of the surrender of the Army of Northern Virginia at Appomattox in April 1865.  It was painted in the 1920s by Jean Leon Gerome Ferris and clearly reflects the ascendency of Lee in our national memory and imagination.  Ferris titled his painting, “Let Us Have Peace” even though these words were not spoken by Grant for another three years as a campaign slogan at the start of his presidential bid in 1868.  We spent quite a bit of time with this painting in class last week and a number of my students were struck by the placement of both Grant and Lee as well as their hand gestures.  In fact, a few students thought that if a viewer didn’t know any better they would have to conclude that Grant was surrendering to Lee.  Notice Grant’s hand as it embraces a much more forceful and self-confident Lee who appears to be in charge of the situation.  The relaxed pose of Grant’s officers in the background reinforces this contrast.

Much has been made of the attire of the respective commanders, which is also quite telling as a reflection of what we find worth remembering.  Supposedly Lee’s immaculate dress and Grant’s muddy boots point to fundamental differences in character rather than the exigencies of the day.  At times it seems as if the contrast is meant to imply that Grant didn’t really deserve to accept Lee’s surrender.  The emphasis on dress in the McLean Parlor continues to find voice.  Consider this short piece in the Vicksburg Post by Gordon Cotton who speculates on whether those boots were gifts from two Vicksburg sisters, Sallie and Lucy Marshall.  It’s a legitimate question, but would it matter at all if a particular narrative of this moment in time had not been burned into our Civil War memory?

One of the reasons I find the study of historical memory to be so fascinating is that often it is not about history at all, but about what the remember believes he/she needs to make sense of the present.  In some cases the form of remembrance eclipses entirely the historical subject in question and its borders become porous.  Robert Moore’s most recent post is a thoughtful reflection on our remembrance of Lee-Jackson Day:

Mr. Cotton includes the following tribute by Ben Hill, which appeared in the Confederate Veteran in 1901 at the end of his article: “He was a foe without hate, a friend without treachery, a soldier without cruelty, and a victim without murmuring. He was a public official without vices, a private citizen without wrong, a neighbor without reproach, a Christian without hypocrisy, and a man without guile.  He was Caesar without ambition, Frederick without tyranny, Napoleon without selfishness, and Washington without his reward.”

Perhaps he was all these things and more.  I couldn’t possibly know one way or the other without having spent significant time with the man.  It may even be the case that Lee’s boots were a gift from two residents of Vicksburg.  Mr. Cotton notes that it is impossible to know for sure.  What I do know is that Robert E. Lee surrendered to Grant in the McLean house on April 9, 1865.