Why Does Hollywood Cemetery Need a Michael Shaara Memorial Bench? 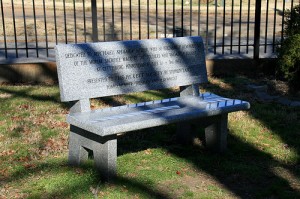 Hollywood Cemetery is a very special place.  This is the second year that I’ve brought students to this cemetery and I do so because it is rich in history and memory.  Every time I walk up Confederate Avenue I still get a little lump in my stomach as the Confederate obelisk comes into view as well as the countless Confederate graves – many of them unidentified.  Today I talked quite a bit about the steps that the Hollywood LMA took to bring the Gettysburg dead to Richmond in the early 1870s.  My students were visibly moved as they acknowledged the young ages indicated on many of the markers and the dates of death which connected them to the battle of Gettysburg.

As we walked around the loop to where George Pickett is buried one of my student pointed to a bench located next to the grave.  At first I couldn’t identify it, but within a few seconds I burst out laughing after reading the inscription.  The bench is a memorial to Michael Shaara and was dedicated this past July by the Pickett Society of Richmond.  Before proceeding, can someone tell me why the hell we need a Pickett Society?  Exactly what did this man do that was so special other than take part in a battle that for any number of reasons became immortalized as the great turning point of the war?  As I was saying, the bench is dedicated to Michael Shaara and was funded with the help of actor Stephen Lang, who played Pickett in the movie “Gettysburg” and who serves on the society’s board of directors with Ron Maxwell.  The inscription on the bench reads as follows:

Dedicated to Michael Shaara, Author, who so poignantly reminded us of the mortal sacrifice made by the soldiers who valiantly fought at Gettysburg, Pennsylvania, July 1st – 3rd, 1863 Presented to The Pickett Society by Stephen Lang, Board Member, Thespian & Playwright

I honestly don’t know where to begin with this ridiculous piece of commemoration.  The inscription has nothing whatsoever to do with Pickett other than to acknowledge one of the most popular works of historical fiction and its author.  More disturbing is that this organization is essentially acknowledging that their own identification with the general has little to do with serious history and has everything to do with a work of fiction and accompanying movie. In short, history and pop culture have become blurred.  The organization itself seems to have only started in 2000 which connects it directly to both the popularity of the movie and, in turn, Shaara’s book.

This bench has no business being on the grounds of Hollywood Cemetery and it certainly has no place in the Confederate section within feet of the remains of thousands of men who fought and died.  I honestly cannot fathom what the Pickett Society was thinking nor do I understand how the good people who manage HC could have allowed this to happen.  This bench is a piece of trash and ought to be removed immediately out of respect to the people who are buried there.

These people need to rename their organization to the Michael Shaara Society.