A Moment of Insight or Confusion? 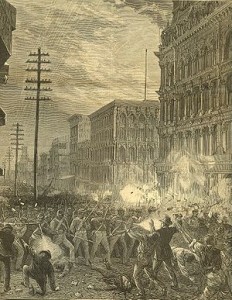 I had one of those rare insights last week when it finally dawned on me that it is my preoccupation and interest in race and emancipation that has clouded my ability to more fully understand the history of the Republican Party beginning in 1855 and through the rest of the nineteenth century.  We tend to forget that the Republican Party was organized primarily around an economic agenda following the demise of the Whig Party and in the wake of the Kansas-Nebraska Act.  The Party initially took shape around the Great Lakes, which pushed hard for internal improvements and a federal government that would encourage and protect the development of industry.   Most Republicans had little interest in racial issues and insisted on preventing slavery from moving into the western territories so as to encourage white Americans to settle and free labor to thrive.  I recently finished reading Marc Egnal’s fine study of the economic origins of the Civil War.  He spends a great deal of time on the formation and evolution of the Republican Party’s platform through the war and into the early 1880s.  The book has helped me to place the focus back on the core pieces of the Party’s economic philosophy and the way in which their position on slavery reinforced it.

My aha moment occured when I realized that in the same year that federal troops were ordered back to their barracks in Florida, South Carolina, and Louisiana as part of the Compromise of 1877, they were ordered by Repubican President Rutherford B. Hayes into the North.  This was in response to what one politican called “the overwhelming labor question” which could be seen in the country’s first national walkout–the Great Railroad Strike.  In the aftermath of 1877, the federal government constructed armories in major cities to ensure that troops would be on hand in the event of further labor difficulties.  In 1892 the governor of Idaho declared martial law and sent militia units and federal troops into the mining region of Coeur d’Alene to break a strike, and in 1894 federal troops were sent to Chicago to help suppress the Pullman Strike led by the American Railway Union, whose 150,000 members included both skilled and unskilled railroad laborers.    Rather than see the abandonment of the South as a betrayal of Republican values it now seems more accurate to suggest that their movement of federal troops north reflected a continued commitment to the protection of the new engines of economic expansion: Carnegie Steel, Standard Oil, and the railroads.  By 1880 foreign workers and unions constituted more of a threat to the future of capitalism than unreconstructed white Southerners.  In short, the Republican Party was carrying out the policies that had defined it from the beginning.