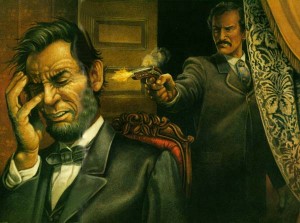 How would you like to attend a reenactment of Abraham Lincoln’s assassination. On March 7 the Sovereign Majestic Theater in Pottsville, Pennsylvania will be transformed into Ford’s Theater. Booth will be played by Charles Sacavage, a retired Pottsville Area School District history teacher who now teaches history part-time at Alvernia University, Reading. He started reenacting Booth as a way to get his students interested in the subject:

We were on the Civil War. They weren’t impressed. I was inspired somehow. We were on the death of Lincoln. (Portraying Booth) I got up on top of my desk and glared at them, and all of a sudden I got their attention. Then I jumped off my desk and yelled ‘Sic semper tyrannus.’ That became almost required in my course. Every kid in Pottsville expected to see me jump off my desk.

Well, whatever works. There is something a little disturbing about reenacting the murder of a president. Given the reference to John F. Kennedy how would we feel about a reenactment of his murder? In that case they could also reenact the murder of Lee Harvey Oswald by Jack Ruby – 2 for 1. The news article noted that children under 12 get in free. In all seriousness, would you bring children under 12 to see the reenactment of a murder? Am I missing something here?