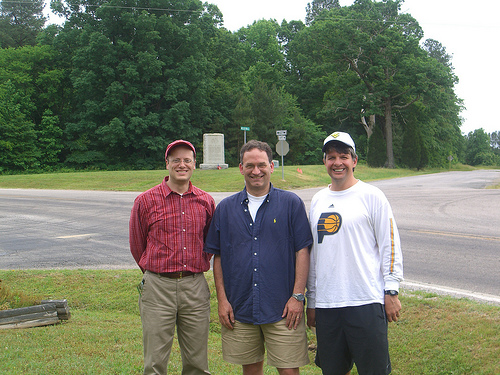 Luckily the rain held off long enough for an enjoyable tour of the Five Forks battlefield with historians Keith Bohannon and Peter Carmichael.  We concentrated mainly in the area along White Oak Road and managed to locate and follow Pickett’s refuse line on his left flank.  The terrain is difficult to interpret given the height of the trees, but the area around the Gravelly Run Church, which served as the jump off point for Warren’s April 1 attack, gave me a sense of the rolling landscape and a better understanding of just how vulnerable Pickett’s division was along the White Oak Road.  From there we headed on over to the Five Forks intersection where we met NPS historian, Tracy Chernault.  Tracy was kind enough to take us over to the new visitor center building which is slated to open in the next few months.  It’s a marked improvement over the little shack that is currently being used at the intersection.  That building will be demolished and the two monuments will be moved to the visitor center.  From there we explored the Confederate right and drove to the approximate spot where Warren was relieved of command along with the field where Custer’s cavalry saw some heavy fighting.  Finally, we stopped at Sutherland Station and Fort Gregg.

Keith and Peter did a first rate job of explaining the ebb and flow of battle to me.  One can’t help but be impressed with their level of knowledge and their passion for battlefield interpretation.   Click here for additional photos.