Was Michael Jackson a Black Confederate? 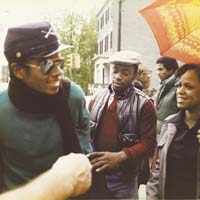 If he was it was only temporary given the drastic changes to the color of his skin.  This photograph was taken on Franklin Street in Richmond in 1980.  My wife and I spent a few hours listening to Michael Jackson’s music on the evening of his death.  It is next to impossible to deny his talent.  Over the past few days I’ve caught snippets of various specials, including a number of interviews with Jackson.  What stands out when not discussing music or dance is an almost childish and simplistic view of the world.  I suspect that his early career left very little time for education and I assume that includes an understanding of American history.  With that in mind it is easy to imagine Jackson not thinking twice about engaging the black community of Richmond in a Confederate kepi.  See the story here.  Thanks for the wonderful music.