Warning: Hide Your Children, the President of the United States is About to Speak 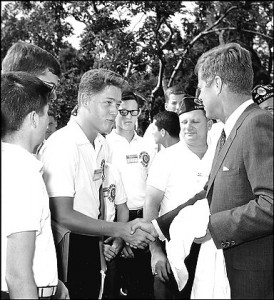 I apologize beforehand, but I can’t help but comment on the controversy surrounding President Obama’s planned address to the nation’s student body this coming Tuesday.  I got a taste of the strong opinions on both sides this morning when I updated my Facebook profile with a quick word of approval for the planned speech.

As a high school history teacher how could I not voice approval for the fact that our highest elected official has decided to take a few minutes from what must be a busy schedule to address the future of this country.  Instead what I was shocked to find was a deep-seated paranoia over what such an address may lead to.  One comment included the suggestion that since Obama is losing popularity with adults that he might be trying to make up for it by rallying children to his support.  Others actually believe that his goal is to brainwash or “indoctrinate” our children.  You can find such sentiments all over the Web.  What is one to make of all of this and what does it say about our country now that there is a significant portion of the population that actually believes that our students ought to be afraid of the president?

My concern is not necessarily with what has become an overly-heated and partisan political landscape.  That is the bread and butter of American politics.  Rather, I am concerned about the long-term consequences for our school children who are being used as pawns in this nasty little clash.  First, let me say that I am no stranger to the history of political partisanship.  I know my American history and I can take you to the beginning of the nation’s founding for what was arguably the most heated period in American politics – and it involved the Founding Fathers themselves.  Both the Federalists and Republicans believed that the other had betrayed the Revolution and was steering the nation down the road to disaster.  A number of these debates played out in public spaces as “affairs of honor” – the most notable being the duel between Burr and Hamilton.  I teach this history to my students.   Hopefully, my students walk away with a profound respect for the Founding Fathers as well as the realization that they had failings and in many cases succumbed to the same vices that define American political history.  However, through it all I do my best to maintain the distinction between the individual and the office.  In short, they see our elected officials at their best and at their worst.  While I teach my students to inculcate a healthy skepticism for government (as the Founders intended) I do not teach them to hate or to assume the worst about the people who occupy its offices.  What are we left with if we do so?

I fail to see how I can teach American political history if it problematic to have students view an address by the president.  How am I supposed to argue for the importance of understanding the leadership offered by past presidents if we as a nation are so fearful of having our students listen to the White House’s current occupant? More importantly, how do you expect us to teach civics and respect for our system of government if we have to protect our students from our own elected officials? I teach history as a way to broaden my student’s perspectives on the world, to see themselves as part of a larger community.  I want them to understand that the freedoms we take for granted come with responsibilities, the most important being civic engagement.

What is truly astonishing is that it is Conservatives who are leading the charge.  Whatever happened to the likes of Bill Bennett and others who constantly rail against the fact that young Americans have no respect for leadership or are losing interest in public service altogether?  Public apathy is supposed to be one of the biggest threats to our culture and yet it is hard not to think that the arguments against Obama’s address will not contribute to the problem.   It turns out that most of our recent presidents have addressed the nation’s student body.  President Bush asked childeren to donate a dollar to Afghanistan back in 2001 as did his father who took the opportunity to encourage students to take their education seriously.  Were Conservatives worried about the potential for indoctrination in these cases?  Much of the controversy surrounds a plan to have children write the president with suggestions on how they can help the nation.  I’ve read that the administration has decided to scrap this idea.  What a shame.  This could have been an opportunity for students to take an active interest in their government and would have opened up a wonderful teaching opportunity to reinforce the importance of civic engagement.

Finally, while I am not the biggest fan of Bill Clinton, I love that image of him shaking hands with President Kennedy.  If I remember correctly, Clinton had to weave his way through the crowd to position himself near the president.  We should leave some room for our children to look up to our highest elected officials.  After all, how we teach them to view public officials today is likely to shape the kinds of leaders they become.