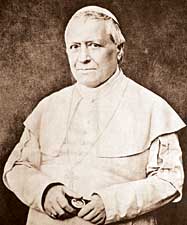 After last week’s post on the controversy surrounding whether the story of Jefferson Davis receiving a crown of thorns from Pope Pius IX was authentic, I received this additional information.

It looks like part of the problem has to do with commentary that is contained in Jefferson Davis: Private Letters 1823-1899, which was selected and edited by Hudson Strode (Harcourt, Brace & World, 1966).  As part of an introduction to two letters written in 1878 Strode wrote the following: “When the ex-President was in prison His Holiness had sent him a large photograph of himself with a crown of thorns woven by the papal fingers and an inscription in his own hand. The photograph and thorn crown may be seen today in Confederate Memorial Hall in New Orleans.”  The first letter was written by Varina for JD, but it is the second letter by JD that is worth considering here: “When our war had closed in the defeat of the South, and I was incarcerated with treatment the most needlessly rigorous, if not designedly cruel; … [more observations on the defamation, etc., JD endured] a voice came from afar to cheer and console me in my solitary captivity. The Holy Father sent me his likeness, and beneath it was written, by his own hand, the comforting invitation our Lord gives to all who are oppressed, in these words: ‘Venite ad me omnes qui laboratis, et ego reficiam vos, dicit Dominus.’ That the inscription was autographic was attested by Al. Cardinal Barnado, Dec. 1866 (under his seal).”  It seems strange that JD specifically mentions the Pope’s letter without also citing an object that was supposedly handmade specifically for him.

In addition, a list of “relics and documents” presented to Memorial Hall in New Orleans by Varina Davis attributes the crown of thorns to her. The following appeared in Confederate Veteran [July 1899]:

[F]amily Bible, given by Jefferson Davis to his wife Varina Jefferson Davis, with his written indorsement to that effect, and one from Mrs. Davis, presenting it to Memorial Hall; pciture of Pope Pius IX (framed), with an autograph and a Latin sentence inscribed on it by his holiness, bearing his seal, and certified to by Cardinal Barnabo Pref. (The Pope sent this picture to Jefferson Davis while a prisoner at Fortress Monroe.  Accompanying the picture is a crown of thorns, made by Mrs. Davis, that hung above it in Mr. Davis’s study[.]

Keep in mind that Varina Davis was still alive in 1899.  Do you believe that Varina would have allowed this attribution to go unanswered if it in fact was a mistake?  That’s it for now.  I will keep you updated if I hear anything more.