“Black Confederate troops are a fact and not fiction….” 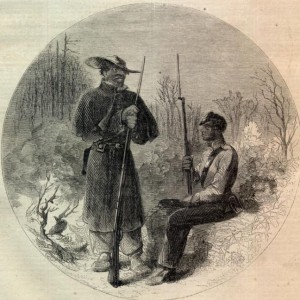 Yesterday I received a comment from a reader in response to one of my posts on black Confederates or what I am now calling, Confederate slaves.  I am not highlighting this comment to necessarily embarrass this particular reader, but to point out the quality or level of sophistication of the vast majority of comments and emails that I receive from people who continue to push this line of thought.  In this case the reader included a link to an image of two armed black men from the January 3, 1863 issue of Harper’s Weekly that you see here.  The short editorial that accompanied the image includes the title, “Rebel Negro Pickets”, and reads as follows:

So much has been said about the wickedness of using the negroes on our side in the present war, that we have thought it worth while to reproduce on this page a sketch sent us from Fredericksburg by our artist, Mr. Theodore R. Davis, which is a faithful representation of what was seen by one of our officers through his field-glass, while on outpost duty at that place. As the picture shows, it represents two full-blooded negroes, fully armed, and serving as pickets in the rebel army. It has long been known to military men that the insurgents affect no scruples about the employment of their slaves in any capacity in which they may be found useful. Yet there are people here at the North who affect to be horrified at the enrollment of negroes into regiments. Let us hope that the President will not be deterred by any squeamish scruples of the kind from garrisoning the Southern forts with fighting men of any color that can be obtained.

Following the link, the commenter suggests simply that, “Black Confederate troops are a fact and not fiction….” Granted that this is an extreme example, but it is an excellent example of the biggest problem when it comes to this issue. There is a glaring inability on the part of many to engage in even the most rudimentary historical analysis. In this case there is no attempt to interpret the newspaper in which the image and commentary were included. No questions are asked about the source of the observation. How does the writer know that the two men were on picket duty? There is no evidence that Davis believed that what he saw were two black soldiers on picket duty. I have to assume that the author of the comment believes that in referring to the two black men as black Confederates he is implying their service as soldiers in the Confederate army. The problem is that even the commentary accompanying the image in Harper’s attempts to push black recruitment in the Union army based on the fact that Confederates were already utilizing their slave labor to support their military.

As serious historians we are supposed to ask questions of the available evidence. A healthy dose of skepticism is always necessary when wading through complex questions. However, in the case of black Confederates I am constantly amazed at the sloppiness that passes for serious thought. If it’s not the unquestioning acceptance of a supposed first-hand account it’s a postwar photograph of a Confederate veteran along with a black man who also happens to be wearing a uniform or a pension file that lists a black man as a member of a specific unit.

Finally, I find it strange and a reflection of just how distorted our memory of the Civil War has become that we would look at this particular image and be inclined to interpret the presence of blacks with the Confederate army as something positive. When I look at this image it reinforces the horror of slavery itself. Consider how many black families were split apart and then consider the number of slaves that were forced to travel with the army and engage in activities that put their own lives at risk in a cause that if successful would have guaranteed their future enslavement.