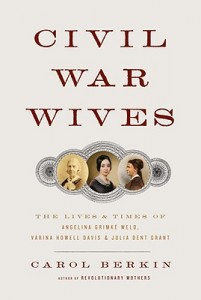 I‘m not a fan of what I like to call “gotcha history”. It goes something like this. A book is marketed or reviewed based on the premise that its subject has been ignored or, even worse, suppressed for some nefarious reason. I sort of understand this first example from Carol Berkin who recently published Civil War Wives. The book is published by Knopf, which means that it will be widely available from most major book chains. The challenge for the author is to find a way to frame the book as offering something new among the vast array of Civil War books available. At HNN and with the title, “Why It’s Time to Write Wives into the Story of the Civil War”, Berkin suggests the following:

Thus the story of the civil war era comes down to us as a masculine portrait, its canvass filled with both powerful and ordinary men, free and slave, black and white.Yet, many of the Americans who endured the crises of secession, the brutalities and tragedies of warfare, the joy of success and the sorrow of defeat were wives, mothers, and daughters. For them, these experiences were not the same as for their husbands, fathers and brothers. If we are to understand the significance of the Civil War, if we are to measure its impact on the American psyche and its social landscape, we must listen to the voices of women as well as those of men. We must reconstruct the world of 19th century women with the same care and attention that we have reconstructed the world of men.

From a certain perspective no one can deny that our collective memory of the Civil War leans heavily to the masculine side. Hell, even most of the women I know who are interested in the Civil War are interested in battles and leaders and this is clearly the domain of men. On the other hand, Berkin is no doubt aware that over the past 15-20 years studies of women and gender during the Civil War have increased significantly. It is almost impossible to miss this ever-expanding literature and it has proven to be extremely helpful in uncovering aspects of the past that have for too long gone unstudied. It’s a clever hook, but not one that will resonate with people who have some understanding of recent Civil War historiography.

The other example is from our friend, Richard Williams, who back in 2007 reviewed two books for the Washington Times. Here is an excerpt of a post I wrote in response to his review. This is an example of the second type of gotcha history.

Today Richard Williams reviewed two recent releases that he believes force us to acknowledge that “Southerners have endured two never-ending accusations that, despite their inaccuracy, have made those from the region feel inferior because of their moral implications.” The first title is Bud Hall’s Den of Misery: Indiana’s Civil War Prison (Pelican Press) and the second is Complicity: How the North Promoted, Prolonged, and Profited from the Slave Trade (Ballantine Books)

Williams makes no attempt to analyze the arguments contained in these studies. Rather he is content to frame his comments around a rather vague assumption: “However, with the recent release of two books, the truth finally is available to all who are willing to examine the facts objectively. What makes these two books so compelling is that they were written by Northerners.” It’s hard to know whether Williams is speaking for himself or the general public when it comes to describing these books as uncovering some kind of long-forgotten truth that has been suspended (one assumes) by those with nefarious interests.

In the case of the first title Williams seems completely oblivious to the historiography of Civil War prisons – both North and South. Perhaps he should be reminded of a few titles that explore in detail the conditions in Northern prisons. They include the edited collection Civil War Prisons (Kent State Press) by William B. Hesseltine. The essays go back to the 1950’s and Hesseltine’s own scholarship on the subject dates to the 1930’s. In addition there is Portals to Hell by Lonnie Speer and the newly-released book While in the Hands of the Enemy by Charles W. Sanders, Jr. (LSU Press). It is disingenuous to make claims about an entire area of historiography without any apparent understanding of the relevant literature. The problem is that further reading would detract from Williams’s initial claim that Southerners (and I assume he means white Southerners) have been the victims of a national lie.

Williams applies the same level of analysis to Complicity and seems to revel in the author’s own conviction that they have discovered something new about the history of slavery in the North. He quotes the authors at length:

We have all grown up, attended schools, and worked in Northern states, from Maine to Maryland. We thought we knew our home. We thought we knew our country. We were wrong…. Slavery had long been identified in the national consciousness as a Southern institution. The time to bury that myth is overdue. Slavery is a story about America, all of America. Together, over the lives of millions of enslaved men and women, Northerners and Southerners shook hands and made a country.

These comments fit perfectly into the working assumptions of the reviewer and of course go unquestioned. There is little doubt that the general public assumes that slavery was specific to the South, but that does not in and of itself provide a sufficient reason to conclude that this is a subject that has gone unstudied. Williams emphasizes the book’s focus on New York City, but is he aware that one of the most comprehensive exhibits on the city’s connection to the “peculiar institution” recently opened at the New York Historical Society? There is even a wonderful companion book edited by Ira Berlin that includes a number of first-rate essays.

The final few sentences do not disappoint as the reviewer’s own prejudices shine forth: “Complicity is thoroughly researched, heavily footnoted and generously illustrated with dozens of photographs, drawing, maps, charts and documents. Unfortunately, the book has been largely ignored by many in academia and the mainstream media. But perhaps the rest of America will, like the authors, soon admit they were wrong about who should share the blame for slavery.” I assume that according to Williams the book has been ignored by academics because they wish to steer clear of the fact of Northern slavery. As I stand here typing this post I look to my left and notice at least four shelves of books about the history of slavery and race in the North. The books cover the colonial period through the twentieth century. All of them have been published in the last thirty years and most of them are authored by academic historians who teach in Northern schools.

Gotcha history is relatively harmless, but don’t be surprised if you are called out for doing a poor job of it.