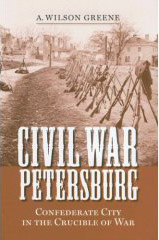 I know I promised to stay away until January, but I don’t really consider this to be a violation of my blogging hiatus.  My review of Will Greene’s book, Civil War Petersburg: Confederate City in the Crucible of War (University of Virginia Press, 2006), is included in the most recent issue of the journal, Civil War History [December 2009, (pp. 504-05)], and I thought I might pass it on for those of you who need a quick Civil War Memory fix.

Although most Civil War enthusiasts are no doubt familiar with the ten-month campaign that enveloped the city of Petersburg between June 1864 and April 1865 few can say much about how its civilian population, both black and white, experienced the changing conditions wrought by war.  The increase in the number of community and regional studies has led to rich insights into the ways both white and black southerners experienced the hardships of war on the home front.  In addition to studies of the home front historians such as Frank Towers and Louis S. Gerteis have examined the extensive growth experienced in urban communities during the final two decades of the antebellum period and beyond.  A. Wilson Greene’s Civil War Petersburg straddles both of these categories and the result is the most scholarly study of the Cockade City to date.

Greene takes a narrative approach which begins on the eve of Lincoln’s election and ends in August 1865.   While the Upper South’s “wait and see” stance following Lincoln’s election has been well documented, Greene’s narrow focus on a major urban center highlights a different set of factors that entered the secession debate.  Greene’s commitment to telling the story of Petersburg from the perspective of the people who resided there highlights their dependency on an economic infrastructure that included tobacco and cotton mills, five rail lines, and potentially dangerous racial dynamic.

Greene’s coverage of race relations gives his study a unique flavor and goes far in pointing to its historiographical significance.  On the eve of the Civil War Petersburg boasted a free African American population of 36 percent, which constituted 26 percent of the city’s total free population; in addition, the free black community included a sizable number who, according to Greene, “owned town lots, and some achieved surprising wealth for the time.” (p. 8).  Such a racial dynamic resulted in complex chains of dependency especially during the war when both white and blacks struggled to defend their homes and maintain their livelihoods.  Greene deals carefully with claims of loyalty by free blacks such as Charles Tinsley (29 years old) who openly declared his loyalty to Virginia’s cause by volunteering to aid the militia.  While Greene does not dismiss out of hand Tinsley’s (and others in the black community) declaration of loyalty to Virginia and the Confederacy he is rightfully skeptical and makes an effort to track the ebb and flow of events in the vicinity of Petersburg and the steps to maintain peaceful race relations.

The siege which began in June 1864 is ably documented by Greene and always with an eye towards explaining how it impacted patterns of daily life and social activities.  Greene does not downplay the struggles that the remaining residents endured throughout the final ten months of the war; however, readers will not find stories of starving civilians that have been handed down as part of the Myth of the Lost Cause.   Race relations are also never far from Greene’s purview, though some readers will finish this study wanting further analysis of this issue.  One of the most interesting examples can be found during the aftermath of the battle of the Crater where USCTs were marched through Petersburg on their way to prison camps further south.  While Greene rightly notes that the mixing of both black and white Union soldiers was done as a form of humiliation to the men in the ranks, it is just as likely that this was carried out to send a clear message to the people of Petersburg connecting the possibility of Confederate defeat with the end of slavery and miscegenation.

Greene’s Civil War Petersburg is an important contribution to the social history of the war and urban life in particular.  This study points to the myriad ways in which the battlefield and home front were connected and often indistinguishable.