Bringing Earl Ijames to You: The Audio Recording

Here is the audio recording of Earl Ijames’s recent talk in Savannah.  The sound quality is pretty good, though there are a few moments where it is difficult to hear what he is saying.  I recommend listening with earphones.  The recording begins with an account of “Colored Confederates” in the OR.  Unfortunately, the recording missed the very beginning of the talk.  During the gap in the tape, Ijames introduced himself and talked about the beginning of the Civil War and apparently confused the 13th Amendment with the Crittenden Compromise.

Well, you decide for yourself.

You may also be interested in this short presentation on “Colored Confederates in Savannah” by Educator and Preservationist Hugh Stiles Golson.  I have not yet had the chance to listen to it.

Note: Both presentations have been posted for educational purposes only.

Fellow blogger and NPS Ranger John Hoptak was kind enough to pass this image along from a May 1862 issue of Harpers Weekly.  I haven’t seen this particular image in quite some time and not surprisingly you won’t find it on any of those black Confederate websites.  It depicts a scene allegedly witnessed by a Union officer through his fieldglass. In it, you can see the Confederate officer forcing his slaves to the front. According to this Union witness, both were ultimately killed. 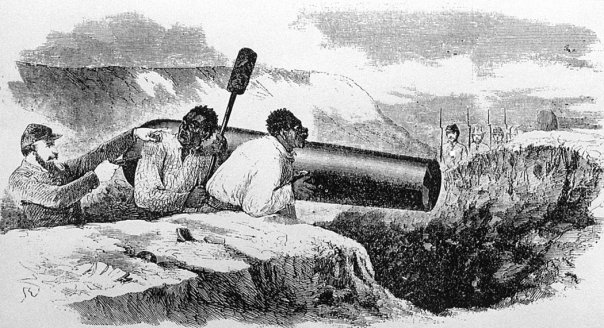