A Glorious Day in Sharpsburg and Shepherdstown

Yesterday was a whirlwind of a day in Sharpsburg, Maryland and Shepherdstown, West Virginia.  The reason for my visit was a chance to spend time with the students in Prof. Mark Snell’s course on the Civil War and memory.  I spent a beautiful morning alone on the Antietam battlefield with my handy copy of Ethan Rafuse’s new guidebook, which I think is excellent.  Ethan knows the battlefield well and does an effective job of positioning the visitor in places that are ideal for understanding the ebb and flow of battle.  I walked and read my way through much of the Morning Phase of the battle and had no problem losing myself in the sun and history.

By the time I had worked up a healthy appetite it was time for lunch with everyone’s favorite NPS Ranger, Mannie Gentile.  I’ve only met Mannie once before and that was a very brief meeting.  That said, Mannie is one of those guys whose personality shines through on his blog and that translates into feeling like you’ve known him for some time.  I thoroughly enjoyed our lunch and especially the conversation.  It’s always nice to spend time with people who do what they love.  It shines through.  The NPS is lucky to have Mannie on board now as a full-time employee and I look forward to my next visit with him.  After lunch we stopped by to see Ted Alexander.  I haven’t seen Ted in a number of years, but he is the man who is responsible for introducing me to the war back in 1993.  I am forever grateful for Ted’s encouragement of my early research interests and for opening up the archives whenever I was in town. 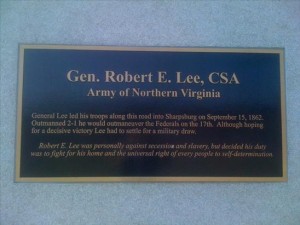 By mid-afternoon it was time to make my way over to the George Tyler Moore Center at Shepherd University.  I had a great time with Mark and especially with his students.  We spent the first half of class discussing John Coski’s study of the Confederate flag.  The discussion was far ranging and the students were enthusiastic.  It was nice for once to be able to sit as a student and not play the role of teacher.  During the second half of the class I had a chance to talk about the blog.  My overall goal was to suggest that blogging has the potential to take what are abstract and challenging topics that tend to be confined to the university and introduce them to a much wider audience.  In short, blogging has the potential to function as a form of public history.  Students in the course have been reading the blog since the beginning of the semester and leaving comments so it was nice to be able to attach a face to their thoughts.  I very much appreciate their questions and I hope to hear more from them as the semester continues following their spring break.  More importantly, it would be nice to see a few students give blogging a shot.

I’ve been associated with the George Tyler Moore Center since 2007 as a conference presenter and as a judge for the Peter Seaborg Prize.  The more time I spend with Mark Snell, Denise Messinger and the rest of the staff the more impressed I am with what they’ve accomplished in so few years and with such a limited budget.  Students at Shepherd who concentrate on Civil War studies are lucky to have such a resource available to them.  I couldn’t be more pleased that I will once again have the opportunity to work with the staff this summer as part of the annual conference in Petersburg as well as on a much larger project that is in the beginning stages.

Just in case you were wondering, the photographs are of the new Lee statue that sits within park boundaries off of the Boonsboro Pike across from the Newcomer Farm.  Yes, the Lost Cause is alive and well in Sharpsburg.