The Richmond Howitzers Were Integrated (well, not quite) 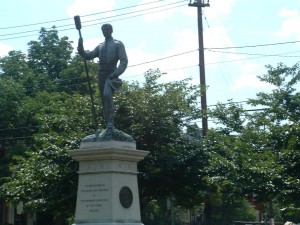 A few days ago I referenced another essay by an individual masquerading as a legitimate authority on Civil War history and “black Confederates.”  In the essay, Bernhard Thuersam, who is the executive director of the Cape Fear Historical Institute, makes the ridiculous assertion that the Richmond Howitzers were “an integrated artillery unit.”  Since no references were provided we are forced to guess as to the origin of the claim.  More than likely it stems from a story about the slave, Aleck Kean, who accompanied John Henry Vest into the Confederate army at the beginning of the war.  Vest was killed in 1863, but for reasons unknown Kean decided to stay with the unit through to the end of the war.

In 1913 the Richmond Howitzers erected a stone to Aleck Kean that read: “In Testimony of this Admiration and Respect for a man who did his duty in war and peace. ‘Well done, good and faithful servant.'”  [Unfortunately, I can’t locate an image of the stone.]  I did locate a short piece by Judge George L. Christian about Kean that appeared in the pages of Confederate Veteran in 1912:

…I affirm that he was the most faithful and efficient man in the performance of every duty pertaining to his sphere that I have ever known.  His whole mind and soul seemed bent on trying to get and prepare something for his mess to eat; and if there was anything to be gotten honestly, Aleck always got the share which was coming to his mess, and he always had that share prepared in the shortest time possible and the most delicious way in which it could have been prepared in camp.  The comfort of having such a man as Aleck around us in those trying times can scarcely be described and certainly cannot be exaggerated.

There is nothing unusual about the content of Christian’s personal memory or the broader collective memory of white southerners at the beginning of the twentieth century.  In short, slaves became loyal servants worthy of remembrance.  However, only an individual lacking the most basic knowledge of the Confederacy and slavery could make the assertion that the Richmond Howitzers were “integrated.”