I have culled a number of helpful sources from Google Books.  Today I am sharing a wonderful image of Douglas Southall Freeman that was taken from a Life magazine article published in May 1940.  The article takes the reader to various places from the Petersburg Campaign, including the Crater and follows Freeman as he attempts to make sense of the growing conflict in Europe and its likely outcome based on his understanding of the Civil War.  It’s an interesting piece and the photographs are wonderful.  The article begins with that famous photograph of Freeman saluting the Lee statue on Monument Avenue in Richmond. 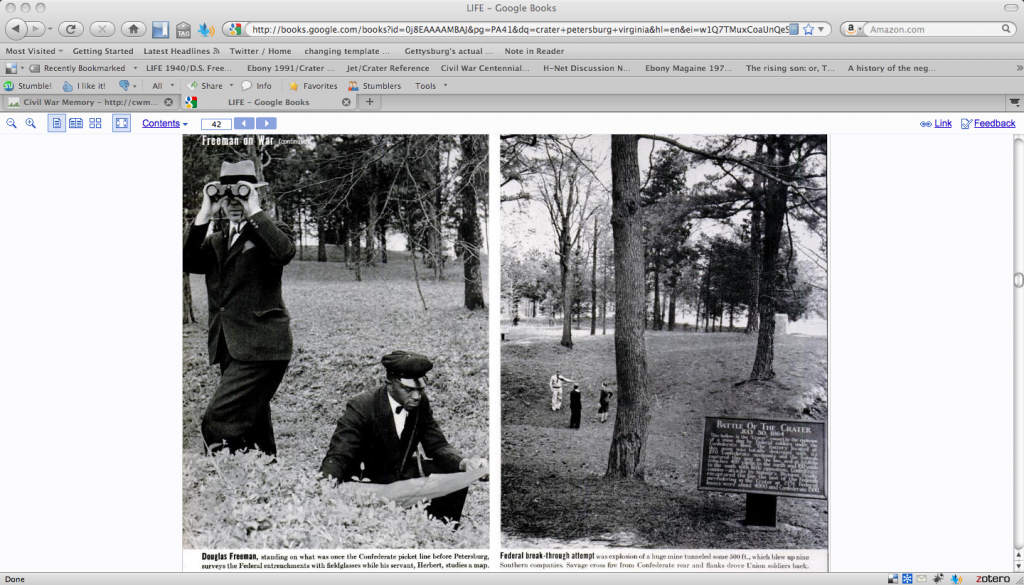 I believe that the photograph of the remains of the Crater was taken facing north.  The modern day trail follows the far side to the left and behind the Confederate position.  If you look closely you can see the South Carolina marker in the rear and to the right behind the tree.  I should mention that Freeman’s fascination with the Civil War began at the Crater.  In 1903 he attended the famous Crater reenactment with his father, who served in the 41st Virginia Infantry.  After watching the veterans of Mahone’s Virginia brigade march by the young Freeman pledged to his father that he would tell their story.  Another great find.

Previous post: “[H]e Had a Great Reverence for the Constituiton”