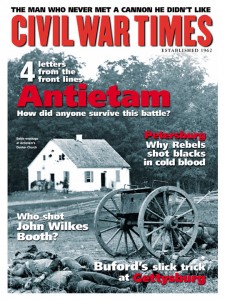 I am very excited about the next issue of Civil War Times, which should be hitting the newsstands very soon.  The October issue will include an essay of mine, titled, “‘Until Every Negro Has Been Slaughtered’: Did Southerners See the Battle of the Crater as a Slave Rebellion?”.  I am hoping that readers will find it to be a thought provoking analysis of what happened to a large number of USCTs following the battle.  All too often the massacre of these black men is reduced to some vaguely defined rage.  I argue that this Confederate rage was a function of a cultural outlook that stretched back into the antebellum period.  Acknowledging the long-standing fears among white southerners regarding the management of a slave society and the dangers of slave rebellions (real and imagined) helps us to better understand the treatment of USCTs following the battle.  From this perspective there is very little that is surprising about the massacre of upwards of 200 black soldiers.

I also like the fact that this article came directly out of a blog post from last summer.  As you can see it received a great deal of attention and I immediately emailed Dana Shoaf about the possibility of turning it into a magazine article.  It’s also an opportunity to thank all of you who commented on that post, which I think is a perfect example of how this format can help in the process of actually doing history.  I go into much more detail in the first chapter of my Crater manuscript, which I am happy to say is almost completed.  No doubt, this article will upset some, but I hope it forces readers to think about this battle from a completely different perspective.  That is what good history should do.  Thanks once again to Dana Shoaf, who expressed enthusiasm for this piece from the beginning.  This is my second article in Civil War Times this year and it’s been a pleasure working with the magazine’s staff.

Previous post: Why Doesn’t the Confederacy Just Fade Away?