Another Black Confederate Bites the Dust 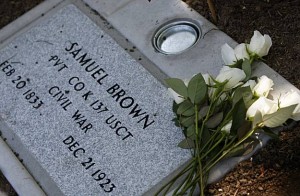 The outrageous claims made by the Sons of Confederate Veterans and others about so-called “black Confederates” would hold up just fine if it weren’t for that little thing called evidence.  Thanks to David Woodbury for bringing this story to my attention.  He suggests that once we have finished counting we may find 7 or 8 black Confederate soldiers.  I think that is much too generous. 😀 My guess is that at the end of the day we may find 4 or 5 legitimate black Confederate soldiers and their stories will tell us much more about how they managed to evade identification rather than as examples of some ludicrous notion of Confederate civil rights.  In this case a little bit of digging into the available primary sources revealed that Scott Brown was, in fact, a soldier in 137th Colored Infantry and not, as previously indicated on his head stone, in the “Confederate States Army.”

Next post: Remembering the Crater at Virginia State University

Previous post: The Battle of the Crater and Slave Rebellions in Civil War Times