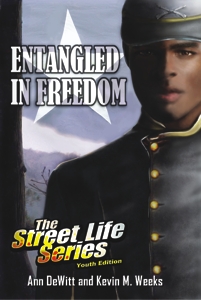 I don’t have much sympathy for adults who buy into the black Confederate meme.  In the end, it is simply a reflection of their gullibility, lack of basic historical knowledge relating to the Civil War and an inability to properly interpret primary sources.  On the other hand and as a teacher, I am disgusted when children are brought into the picture.  They become the victims of the stupidity of others.  Consider this little gem of a book, titled, Entangled in Freedom: A Civil War Novel, which is slated for release in January 2011.  The book is authored by Kevin M. Weeks, who is known for The Street Life Series.  Here is a short description:

Entangled in Freedom, the first novel in this young adult fiction book series, takes a closer look at the life experiences of African-Americans in the Deep South during the War Between the States. Young adult readers follow main character Isaac Green through the dirt roads of Georgia, Tennessee, Kentucky and Virginia to Cumberland Gap where Isaac serves with the 42nd Regiment Georgia Volunteers C.S.A. Historical accounts are derived from 19th century official government records as well as real life family narratives of co-author, Ann DeWitt.

These two names should ring a bell.  Not too long ago I shared a new website on black Confederates that was created by Ann DeWitt.  It’s unfortunate that Ms. DeWitt did not take proper care of her family’s narrative.  Sometimes simply repeating family stories does not honor the memory of one’s ancestors, especially if those stories are inaccurate.