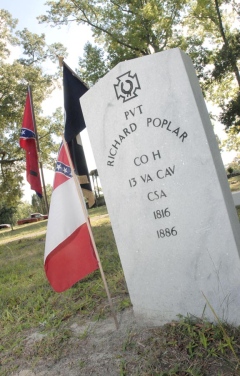 Petersburg’s favorite “black Confederate” is being honored today for his loyal service to the Confederacy.  Richard Poplar’s story is probably quite interesting given the racial dynamic of Petersburg, but like everyone else that the SCV and UDC get their hands on, his story will be reduced to one of loyalty to his comrades and sacrifice for the cause.  His 1886 obituary states the following:

When the Sussex Dragoons were formed at the beginning of the war, and when they became Company H, of the Thirteenth Virginia Cavalry, Richard attached himself to the command.  The Sussex Dragoons were a wealthy organization, and each member of the company had his own servant along with him.  From April 1861, until the retreat from Gettysburg, Richard remained faithfully attached to the regiment.

The reference to Poplar as having “attached himself” to the unit suggests that he did not enlist as a soldier, which is not surprising given that the Confederate government explicitly denied free blacks the opportunity to serve.  Unfortunately, Poplar’s stone indicates that he was, in fact, a soldier.  What I would like to know is, assuming that this stone looks fairly new, what was there before and what did it say about Poplar?  Yes, I know that the H.E. Howard volume on the 13th Virginia Cavalry lists Poplar as a private, but has anyone actually seen his enlistment papers?  He may, in fact, be a bona fide black Confederate soldier.  That would make his story even more interesting, but all I’ve seen are documents related to his capture at Gettysburg on Footnote.com.

And, finally, why do these headstones fail to indicate service as a black Confederate given that so many believe that there has been an active cover-up by various groups?

Here is the 2004 proclamation for Richard Poplar

Today, we honor our own Private Richard (Dick) Poplar on this 18 September 2004. This day will continue the reflection of Richard’s accomplishments for posterity.

May his life, heroism, and memory serves as a beacon to greatness for Petersburg, for our country, and for the world.