Ann DeWitt Is At It Again 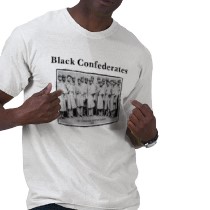 It just continues to get more and more bizarre with each passing week.  Ann DeWitt promised to continue to develop her Black Confederate Soldiers website and she does not disappoint.  She recently added a section on the pension records of Alabama, South Carolina, and Tennessee.   Nowhere does she inform her reader that these pensions were given to former slaves – a fact obscured by the black individual holding a Confederate flag.  But wait, it gets much better.  Check out DeWitt’s description of body servants:

So what is the definition of a body servant?  A body servant is a gentleman’s gentleman.  These African-American men, whether freedmen or slaves, dedicated their lives to the service of men who in some form or fashion shaped the United States of America.  In 21st century vernacular the role is analogous to a position known as an executive assistant—a position today that requires a college Bachelors Degree or equivalent level experience.  Ask any salesman. You cannot secure an appointment with a senior executive without getting approval from his or her  executive assistant.

I deplore slavery. However, my point is that these body servants did break ground in establishing the importance of the role in 21st century context.  Body servants were trusted advisers and confidants to Confederate Generals such as Robert E. Lee, “Stonewall” Jackson, and Nathan Bedford Forrest to name a few.  As an example, capitalist Nathan Bedford Forrest was the most revered as well as loathed Confederate General because Nathan Bedford Forrest in the end was respected by both black and white southern men who served under his leadership.  Look at the official Confederate Tennessee Pension records.  Forrest even had an “escort cavalry,” which in today’s terms we call an entourage.  Even President Barack Obama, the 44th President of the United States, travels with a staff of 500 people.

The African-Americans, who served during the American Civil War from Alabama, served as drummers, musicians, laborers, carpenters and teamsters to name a few.  Alabama Department of Archives & History provides an Online Index with links to original pension applications.  Please note that the Alabama Department of Archives & History does not document if these African-Americans fought for the Union or the Confederate States Army. Some southerners who served in the United States Army continued to fight for the Union. Which begs the question, did some slaves go to war with their southern masters to fight for the Union?

I admit that I had a long day today, but can someone explain what DeWitt is asking in these final two sentences? I am assuming that the men listed on this page functioned as servants to soldiers in the Confederate army.

If that wasn’t enough, H.K. Edgerton is referred to as a “Human Rights Defender.” And, finally we have this creative interpretation of the 13th Amendment to the Constitution.  Keep in mind that DeWitt intends this to be an educational site for teachers and students.  O.K. that’s enough crazy for one day.

Previous post: Can You Afford Not To Use Social Media?