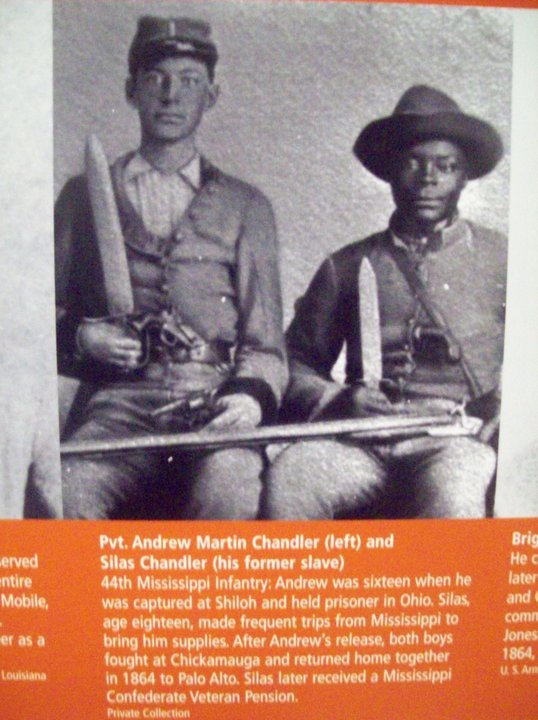 Regular readers of this blog know that I have a deep respect for the work of the National Park Service.  Not only do they do an outstanding job of preserving the physical landscapes of many of our most important Civil War sites, but they help us to better understand what took place there and what it means.  For any number of reasons that job has proven to be incredibly difficult over the past two decades.  Still, no one is perfect and as a historical institution they are bound to make mistakes.  Unfortunately, this is one of those instances that must be pointed out given how widely the subject has been misunderstood and even intentionally distorted.

As you can see this is the famous image of Andrew and Silas Chandler, which is often used to buttress arguments concerning the existence of black Confederate soldiers.  It is one of the most popular images that can be found on the many websites on the topic.  In this case the image is part of an exhibit at the Corinth Interpretive Center at Shiloh.  Before proceeding, I should point out that I am currently co-writing an article with the great-granddaughter of Silas Chandler, which we hope to publish in a magazine in the coming year.  The brief description under the image could not be more misleading.  First and foremost, not once is the visitor told that Silas was a slave and not a soldier.  According to the 1880 U.S. Census, Silas was born on January 1, 1837, while Andrew was born on April 3, 1844, which placed them seven years apart rather than two.  It is often suggested that the two boys were childhood friends; however, there is no evidence to suggest such a relationship.  That is not to suggest that the two were not acquainted with one another and it certainly should not prevent us from looking into how this master-slave relationship was shaped by the hardship of war.  Finally, Silas did receive a pension for his participation in the war, but it was not as a Confederate veterans.  Like other slaves Silas received a pension under the “Application of Indigent Servants of Soldiers and Sailors of the Late Confederacy.”  The application clearly indicates servants were not recognized as a Confederate soldiers, but were entitled to a pension owing to his service to his master.

This is not the first time that the NPS has stepped into the black Confederate morass, but let’s hope that as in that case they step up and make the necessary corrections.

Previous post: I Hope All of You Have a Merry [confederate] Christmas!