We’ll Always Have the Centennial

Update: I suspect that this is not the kind of coverage that the SCV is looking for. “They started at a fountain where slaves were once sold, past the church that Martin Luther King Jr. led during the Montgomery Bus Boycott, and ended at the Capitol steps, where Alabama’s old and modern history often collide. It’s the spot where former Gov. George C. Wallace proclaimed “segregation forever” in 1963 and where King concluded the historic Selma-to-Montgomery voting rights march in 1965.” 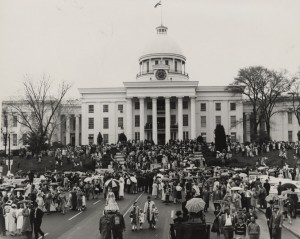 “The pageant took place during the week of February 12, 1961.  Attended by an estimated 50,000 people, it was a colorful affair complete with voodoo dancers and minstrels.  The accompanying brochure bore witness to the business community’s support.  One advertisement–for Montgomery Fair, former employer of the bus boycott heroine Rosa Parks–featured drawings of Civil War regalia and a southern belle and boasted that it had been central Alabama’s “leading department store” since 1868.  Another, carrying a Rebel flag, proclaimed “Winn Dixie and Kwik-Chek Show Phenomenal Growth During a Century of Progress in Dixieland.”  Spectators who paid up to five dollars a ticket watched a sixteen-segment performance by a home-grown cast numbering over a thousand.  The two-hour pageant, a combination of the spoken word, music, and dancing, began with a salute to the Belle of the Confederacy an then took viewers through the major events of the secession crisis. In a section entitled “General Davis Speaks,” the audience heard an almost verbatim staging of the Confederate president’s inaugural in which he trumpeted the cause of states’ rights and the legitimacy of secession.  On leaving the coliseum, spectators were greeted with a crashing fireworks display to mark the founding of the southern nation.  A watching journalist pronounced the whole performance a genuine “spectacular,” though he did complain that in the inauguration scene Jefferson Davis had been portrayed “as a corn-pone politician at a Black Belt party rally.” (p. 81)

“This Saturday, the 150th anniversary event will bear some similarities: Hundreds of men are expected to march through the heart of Montgomery. Some will parade in Confederate gray. Some will display the controversial battle flag. On the steps of the white-domed state Capitol, an ersatz Davis will place his hand on a Bible. A band will play “Dixie.”  But so far, this year’s festivities are generating scant buy-in from city and state officials, and relatively little buzz among locals.  Mayor Todd Strange said he probably won’t attend. Randy George, president of the Chamber of Commerce, doesn’t have the event on his to-do list. The office of Gov. Robert Bentley (R) – who, like Strange and George, is white – did not respond to a query on the matter.  “I hadn’t even heard it was happening,” Rhonda Campbell, 43, the manager of a payday loan business near the parade route, said, echoing many residents interviewed last week.”

We’ll always have the Centennial.