Thoughtful Reflection in the Heart of the Confederacy 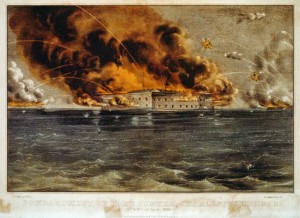 Over the past few months I’ve done a number of interviews about the Civil War Sesquicentennial.  At the end of my latest interview this past Friday the reporter noted that this was not the story that she anticipated writing.  What she meant was that she was not going to write up a story around the standard narrative of lingering disagreements and bitterness between North and South and black and white.  As I’ve suggested on numerous occasions, that narrative simply does not hold up given the political and demographic shifts that have taken place throughout much of the country over the past few decades.

Look no further than the thoughtful commentary contained in the newspapers in Charleston, South Carolina, which is preparing to mark the 150th anniversary of Fort Sumter.  You will very little bitterness; rather, what you will find are individuals from different backgrounds working to better understand the city’s rich history and its continued significance.  Consider the following excerpts from a special issue of the Charleston City Paper.

For me, I hope to reflect, evaluate, and educate. As we live in one of the most historically important cities in the United States, we are keepers of our city’s past. We can neither gloss over the evils of slavery, nor can we outright condemn those who fought for Southern independence. On the anniversary of this historically significant event, let us each in our own way embrace the complexity surrounding the firing on Fort Sumter and recognize the sacrifices that were made by our forbearers.

And then I learned something that changed my mind. I had always thought the Rebel flag had been there since the Civil War. But then I found out I was wrong. The flag hadn’t been placed on top of the Statehouse until the 1960s, right as the civil rights movement was just starting to really gear up. Heck, it wasn’t even the actual flag of the Confederacy. And it was then that I began to see the flag for what it really was. It was a revisionist middle finger.

In commemoration of the Civil War Sesquicentennial, two of Charleston’s most renowned art houses, the City Gallery at Waterfront Park and the Gibbes Museum of Art, are gearing up to host exhibitions that explore differing aspects of the war, from the battles themselves to slavery to the civil rights movement that emerged years later. Ellen Dressler Moryl, the director of the city of Charleston’s Office of Cultural Affairs, says, “It’s very important to remember that this is a teaching moment. It’s not a celebration. It’s a moment to observe and learn from what happened in our history so that we don’t repeat that.”

Let’s stop arguing about the causes of the Civil War. Even undeniable facts from the historical record won’t change the minds of hardened Confederate sympathizers who have grown up believing the War Between the States was a war of Northern aggression that had nothing to do with slavery. After all, there are still folks who deny the Holocaust ever happened, even though survivors still exist who can give eyewitness accounts of this tragedy…. Instead of rehashing our disagreements about how the Civil War started, we should ask if there are lessons that can be learned from the conflict that are still applicable today. Although the specific issues may have changed, several others are still relevant.

No, this is not your grandfather’s Civil War commemoration and we should all be thankful for that.

Next post: Welcome to the University of North Carolina Press