The iconic image of Andrew and Silas Chandler has fueled some of the most outlandish claims about the service of thousands of black Confederate soldiers as well as the continued loyalty of slaves to their masters and the Confederate war effort.  In the case of Andrew and Silas the image of the two men seated and armed has been used as a centerpiece of a narrative that assumes a close friendship between the two that began before the war and lasted well into the postwar era.  None of these claims can be supported by the available evidence.  One of the claims that can be found on countless websites suggests that Andrew assisted Silas in procuring a pension in the 1870s.  Silas did indeed apply for a pension, but not until 1916 and it is not clear that it was approved.  Most importantly, the pension that Silas received was for his presence in the army as a slave and not a soldier.

If you look closely at the pension you will notice another interesting piece of information.  The pension indicates that Silas served both Andrew and his brother, Benjamin S. Chandler.  Benjamin joined the Ninth Mississippi Cavalry in January 1864. According to his military service record, he surrendered to the Union army at Washington, Georgia, on May 10, 1865. 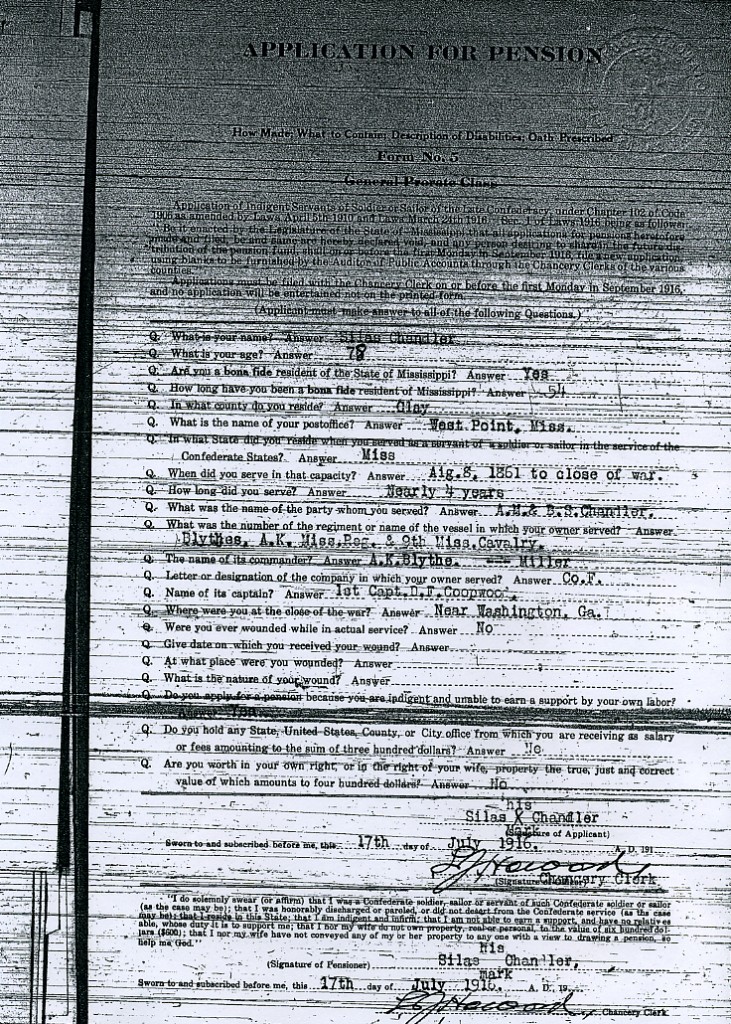 The story gets better.

The Ninth Mississippi Cavalry escorted President Jefferson Davis once the capital was abandoned in early April 1865.  According to the available evidence, Benjamin’s regiment separated from Jefferson Davis’s group near Washington, Georgia, on May 7, 1865, and were ordered to turn themselves in. They did so and on the same day that Davis was captured.  Not surprisingly, there is no evidence to assist us in understanding Silas’s experience while he was with Benjamin.  I am sure this will not prevent certain groups and individuals from assuming what they will about Silas’s strong feelings of loyalty and fidelity to the cause.  What they will overlook, however, is that the only reason Silas was with Davis was because a member of the family that owned him was present.

So, what if anything does this additional piece of information add to our understanding of the Andrew-Silas narrative?  At first glance not much, but let me suggest that the addition of Benjamin to the picture serves to remind us of one fundamental fact of slavery.  Andrew and Silas were not equals when they left for war in 1861.  Whatever their understanding of one another entailed, in the end, Silas’s presence was a function of his instrumental value as a slave.  In short, he was there to serve and he performed that essential function when and where it was necessary.

The more I dig into Silas’s life the more I come to admire him.  The plantation was, at times, a dangerous place, but Silas managed to survive the most harrowing four years of his life (1861-1865) as a slave of the Chandler family.