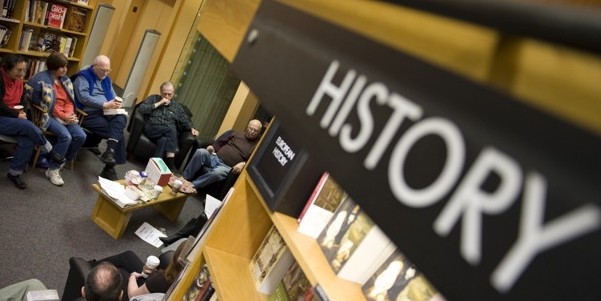 By now most of you are aware that Borders Books & Music has closed up shop.  The reasons for the closure are many from the company’s failure to jump on the e-book bandwagon to the exorbitant rents it paid for specific locations.  Eric Wittenberg has reflected on his experience as a long-time Borders customer.  I am also just a bit sad about the end of Borders.  Yes, I was a customer for many years but for a few short years in the 1990s I was an employee.

I worked for Borders Store #10 in Rockville, Maryland from 1994 to 1998.  At the time I was a graduate student studying philosophy at a local university so the bookstore was a way to make a little extra cash.  I distinctly remember the two weeks of training, which included a book test as well as extensive practice on customer relations.  It was the perfect job for me and I quickly fell in love with the place.  Because of my education I was considered to be the go-to person for the philosophy and religion sections.  My responsibilities included having to keep that section organized and well stocked, but the best part was the opportunity to interact with the customers.  We were expected to spend time building relationships with customers by answering questions and suggesting appropriate titles.  It rarely felt like a job.

Now that I look back on my four years at Borders what truly stands out in my memory are my co-workers.  Many of them were current college students or had recently graduated and were contemplating their next move.  That turned out to be me once I finished my masters degree and having friends in the same situation proved to be incredibly comforting.  We supported one another and were there to listen when the future appeared bleak.  I certainly had my share of those moments during this period.  It would have been much more difficult for me had I not had the support of my co-workers.

In fact, looking back I now see the extent to which their support helped push me forward to where I am today.  I fell in love with American history and the Civil War era while an employee.  We had a well stocked Civil War section, which I could take advantage of at any time.  I bought quite a bit with my employee discount and the the Christmas discount could not come soon enough.  I devoured books during my break, while working the register and even in between helping customers in the few secluded corners of the store.  While the ordering department did an adequate job stocking a wide range of Civil War titles I was always encouraged to special order anything I thought deserved a place on the shelves.

In 1996 I started a Civil War book group which met once a month.  It was a great group of people and we were all passionate about the history.  Every month we met having read a book.  The discussions were often heated, but always respectful and always focused on the book.  I invited as many authors in as possible to join us.  Some of them were truly shocked to find themselves in the hot seat rather than simply having to autograph a few books.  A few of the authors who joined us included Craig Symonds, Kevin C. Ruffner, and Ira Berlin.

One of my best friends at the store was a former White House aide to Richard Nixon.  He sort of took me under his wing, but one day he suggested that since I read so many Civil War books that I should write a review for The Washington Times, which ran a Civil War page every Saturday.  I had never thought about publishing anything previous to this and the suggestion proved to be crucial for my overall trajectory.  Another experience that stands out is attending a publishing party for Charles Frazier’s bestseller, Cold Mountain.  I remember having a wonderful chat with Frazier, but what really stands out is trying to keep up with P.J. O’Rourke at the bar – truly one of the funniest guys I’ve ever met.  That was a very bad miscalculation on my part and long night.

The highlight of my time at Borders was without a doubt what I called “Civil War Day.”  I organized a day-long event that included some of the most popular Civil War authors in the D.C. area.  It was an absolute blast and I had the full support of the store managers, who understood how important it was to me.  Authors included Edwin Fischel, Ernest Ferguson, William D. Matter, and Brian Pohanka.  I invited Union and Confederate reenactors to share their craft as well as a drum and fife unit.  The day was a huge success, but more importantly it was the kind of thing that helped to instill a bit of confidence in myself.

What I appreciate most was the encouragement from my friends that I get back into teaching, which I did.  I ended up teaching as an adjunct at a local community college, but one day a co-worker suggested that I apply for a teaching position at a math and science school in Mobile, Alabama, which I did as well.  I am so glad I did because a beautiful woman living in New York City answered the very same job ad. 🙂

To me Borders will always be more than just another company.